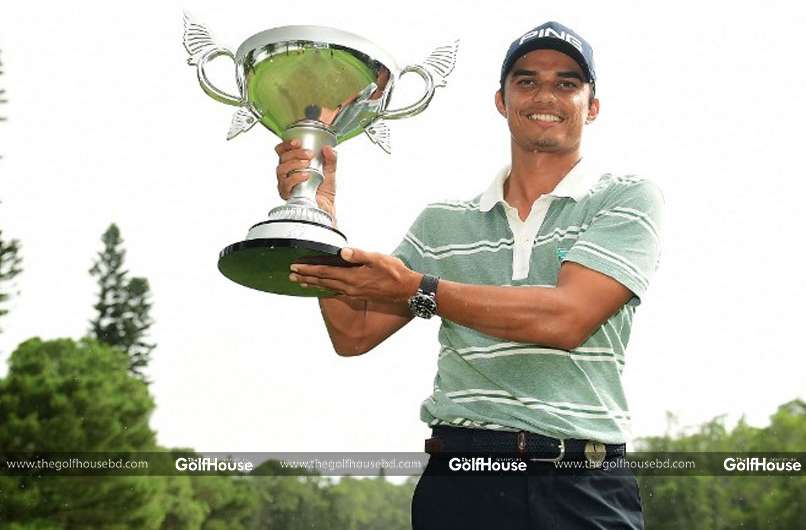 India’s Ajeetesh Sandhu gave himself the perfect early birthday present by holding his nerve to clinch his maiden Asian Tour title at the US$500,000 Yeangder Tournament Players Championship (TPC) on Sunday.

Sandhu, who turns 29 today, completed a career turnaround, earning a two-year winner’s exemption on the region’s premier Tour, following his breakthrough victory at the Linkou International Golf and Country Club.

After missing the mark at the Asian Tour Qualifying School earlier in January, Sandhu had to rely on his country exemption where he made two cuts in four starts, including a third-place result at the TAKE Solutions Masters in August, prior to his breakthrough in Chinese Taipei.

His triumph, however, did not come as a surprise. Sandhu showed glimpse of his potential when he won his third professional title on his domestic circuit in February. He has never finished outside top-15 in eight starts on his local Tour this season.

Sandhu, who joined the play-for-pay ranks in 2008, took home his career’s biggest prize purse of US$90,000 and propelled to a career-high 27th place on the Order of Merit, led by Gavin Green of Malaysia with a current haul of US$527,346.

“It is absolutely amazing. I thought I would be a lot more nervous than what I was but when I got back to the hotel after the third round, I received so much of support from India. So many people, including people whom I don’t know, were messaging me. That really calmed me down.

“I’m proud that I managed to focus on my own game. I was just trying to hit the next shot the best that I could and I won. I’ve had a couple of close calls at home but I didn’t get it done. I guess I was saving for this win,” said the talented Indian.

Sandhu closed with a 70 for a winning total of 12-under-par 276, which was one shot better than American Johannes Veerman, who battled to a 71 to settle for second place after taking a share of the lead in the first three rounds.

Veerman, the reigning Asian Development Tour (ADT) Order of Merit champion, took pride in his commendable result despite missing out on the win.

“I hope it is just a matter of ‘when’ I will win my first Asian Tour title. Look at Gavin (Green), he is my friend and he finished three times runner-up before he finally won. That just shows you that you have to keep moving forward,” said the 25-year-old Texan.

Local hero Lu Wei-chih was clearly disappointed for missing out on his second Yeangder TPC title but the life warrior took solace with his third-place finish, which is his best result on the Asian Tour so far this season.

“I am disappointed with how I finished and I think I could have done better if not for my three bogeys on 12, 14 and 17.  But overall, it is okay and I’m still happy with the result,” said the 38-year-old Lu, a four-time Asian Tour winner and a brain tumour survivor.

The Tour will head to Malaysia for the lucrative CIMB Classic, slated to take place from October 12 to 15 this week.