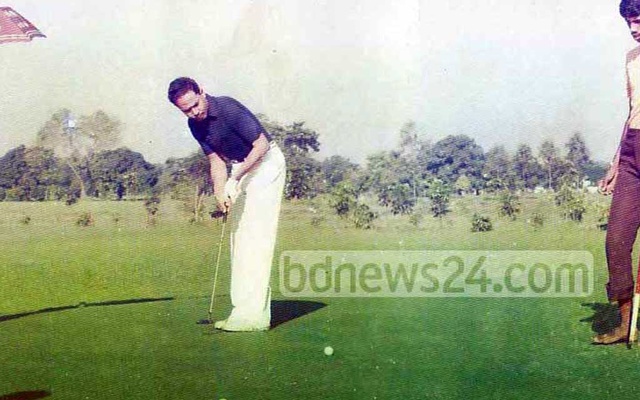 Former President of Bangladesh Hussain Mohammad Ershad passed away on July 14 in Dhaka at the age of 89. He was an avid golf lover and a passionate golfer. A sportsman during his youth, he started playing golf when the facilities for golf in Bangladesh were minimal. Yet he continued to play and patronise the game. Even when he could not play due to his ailments, he used to go to the Kurmitola Golf Club to watch the game and meet old friend. We reproduce this interview of the late President from our archive.

When did you feel the need to spread golf and when did you start playing the game?

I was Deputy Chief of Army when I was started playing golf. After playing a few days, I got really addicted to the game kept playing. At the beginning we did not have that many members. Gradually the number of members increased and now golf if getting more and more popular every day.

When did you usually used to play golf?

I used to play in the morning and normally on Fridays and Saturdays. I usually played nine-hole games.

We know you were a very good sportsman as you have also played other sports. Was golf always your passion?

Yes, I played many sports like –Volleyball, Tennis etc. In 1976 or 1978, I started playing golf. During that time the course was not that good. Gradually the course was improved and I started playing at KGC. This land was supposed to be for an army housing, but later it turned into a very popular golf course. Once it used to be known as Korean Golf Course as many Koreans used to play here. Gradually Bangladeshi people started playing more and today a huge number of people from all nationalities play golf here.

Every day in golf is a memory. We played here to meet with old partners, to keep company and have a good time together. Those were wonderful times. We really enjoyed playing golf. Golf got the preference over everything else.

Which are your favorite golf courses in Bangladesh and abroad?

I didn’t play in too many courses. In Bangladesh, KGC is my most favourite one. I played in Thailand, In Morocco, in Canada. But it is difficult for me to say which one is the best course as every course is different and challenging.