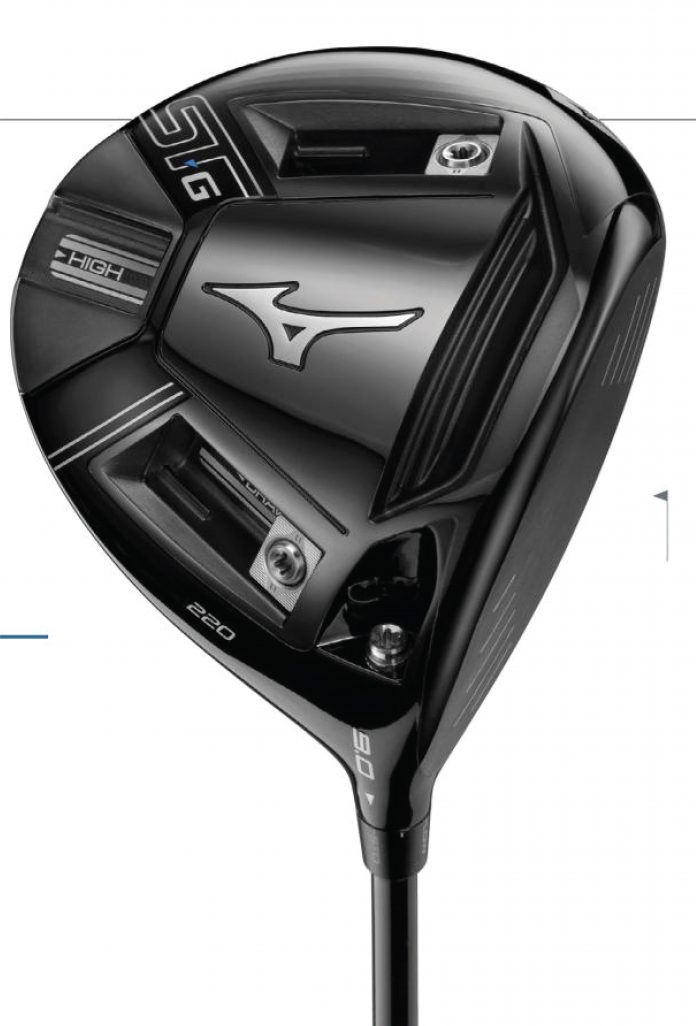 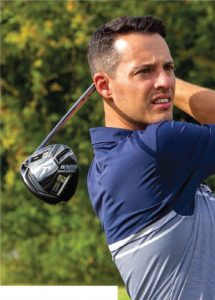 The ST-G 220 is a third ST model
from Mizuno that offers a different address and spin profile, as well as moveable weight.
Make a few practice swings and you may notice a loud ‘whoosh’ sound, unmistakably made by the air passing over the weight tracks. We swung this driver 2mph slower on average than our TaylorMade SIM2 this could be down to a combination of the air resistance from the tracks, but also the shorter stock shaft of 45 inches.
But in the low spin setting (pictured top), the ball speed was actually very similar, so it became more efficient and the strikes were better. In like for like loft, both produced almost identical launch, spin and peak height, with the SIM2 carrying three yards further.
In the same low spin setting, it really impressed out of the middle on the course.
The head is incredibly solid with a dense, powerful feel and the reward for centred strikes is a towering flight with a hint of curve at the top. In fact, workability was one of this driver’s strong suits in this setting. Catch it poorly, however, and you’ll lose control fairly easily, which is where you have a decision to make. With the three tracks, you can make this a much more user-friendly driver.
Mizuno says positioning both weights in the shorter rear centre track (pictured left) is the most forgiving setting. When we tested it with the weights at the back of the side tracks, the spin went up by about 200rpm and distance came down by eight yards. So, there is a trade off between distance and playability. Over time, the shorter shaft should mean you have more control of the face than most low spin drivers.
The ST-G 220 is a versatile driver that can be set up to favour distance, control or a specific shot shape, but high-spin golfers will appreciate this new option.

GM Verdict
The new T200 represents the
biggest makeover of any iron
within the updated Titleist
T-Series, not only because of
how it looks but also how it has been constructed.
Better players won’t be at all
put off by the look of this club – it certainly doesn’t appear chunky but the 7-iron loft of 31° suggests this is a small gameimprovement iron, rather than a forgiving players’ club.
Titleist claims to have made a
conscious effort to improve the sound and feel of this iron versus the prior model. But while it remains lively from a wide area, we didn’t feel like there was any improvement here, and it actually maintained a clicky sound similar to if you were to tap the back of the iron with your fingernail. It was refreshing to see the spin not drop too much versus the T100 and T100s only by 200 to 300rpm and the flight overall was a little higher to maintain stopping power.
The stronger loft did provide a lot more ball speed than the T100s, but this didn’t really lead to longer carries, which was disappointing although our longest effort did carry 177 yards. The turf interaction didn’t seem as cleanor brisk, either, which could be a contributing factor.
The performance certainly opens the door for mixing the models within a set perhaps combining T200 long irons with T100s short irons although there is a noticeable difference in size.
For any low-handicapper who isn’t the best ball-striker, or a keen golfer in the low-teen handicap range, the T200 would seem to offer the ideal blend of performance attributes.
But better players should certainly consider following the tour players’ lead and adding the T200 model in the long-irons, because of the extra playability it affords versus the T100 irons.
The T200 is powerful and stable, and while it lacks wow factor, it should assist with both extra distance and tighter dispersion.