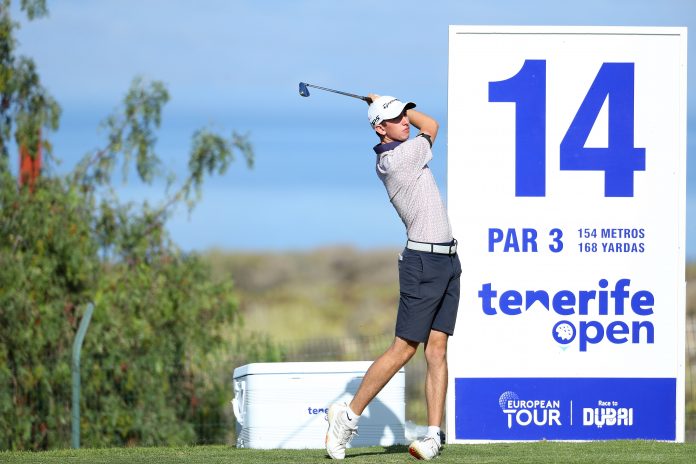 A mix of new faces and seasoned campaigners will tee it up at Golf Costa Adeje as the European Tour arrives in Tenerife for the first time since 2003.

The Tenerife Open marks the second week of the new Canary Islands swing, following on from the Gran Canaria Lopesan Open, and is the first of back to back events on the picturesque island.

The last time the European Tour played in the Atlantic Ocean archipelago was at this same venue in 2003, with Alvaro Quiros and Gonzalo Fernández-Castaño  amongst the amateurs teeing it up alongside national heroes including Seve Ballesteros and José María Olazábal. The Spanish pair, David Drysdale of Scotland and Welshman Jamie Donaldson have made the return trip 18 years on.

Northern Irishman Tom McKibbin and Spain’s Eduard Rousaud are at the other end of the scale as both take the first steps in their professional careers.

McKibbin makes his professional debut at the Tenerife Open aged 18 after an impressive junior and amateur career that includes winning the World Kids Championship at the age of 12 and representing Great Britain & Ireland on two occasions in the Jacques Leglise Trophy.

Also in the field is last week’s winner, 21 year old Garrick Higgo of South Africa and American John Catlin, who has secured an invite to the US PGA Championship next month after winning his third European Tour title within eight months at the Austrian Golf Open two weeks ago.

Tom McKibbin: I’m feeling good, very excited to start this new journey and have a good few weeks over here. I’m really looking forward to it. I have been playing golf for eight or nine years, playing quite well through each level, and I felt like my game was ready to take the next step. So I took the decision and went with it.

“I don’t really know (what my expectations are). I will just try to play the best I can. I don’t want to put too much pressure on myself. I’m just going to try to trust every shot I hit, commit to every shot and that should add up to a good week.

“Obviously Rory (McIlroy) and those type of guys I really look up to and they are an inspiration to me. Hopefully one day I’ll be up near them.”

Eduard Rousaud:  “This week I hope to play well. My goal is to do my job, to do my thing, it is a process. I have no expectations this week because I never really do. Having them makes my thoughts go to the future, it takes away the perspectives of where I am, and that does not help me. I always play with my head in the present, shot by shot.

“I come here really wanting to do well and I don’t set limits. I have come to play golf, in my own way and to go as low as possible. I’m a pretty complete player, not super explosive, but when I pick up the pace I usually keep it up.”

Gonzalo Fernández-Castaño: “It’s great to be back. When I played here the last time it was 2003 and I played as an amateur. Unfortunately I didn’t make the cut but I do have good memories. I remember watching Seve play, he was in the field that week. I remember following him around. It’s good to be able to tell your kids that you played tournaments alongside Seve Ballesteros.

“Imagine for guys like us, Spanish, playing the Spanish Open, with guys like Seve and others. I remember it was an amazing week as Pablo Martin, who was an amateur as well, he was leading after 54 holes. He didn’t win the tournament, but it was a big deal. It was an amazing experience, for us it was the highlight of the year to be able to compete on the European Tour against the best players in Europe.”

“I remember the scoring being very low. There were six par fives back then I believe. We will play eight as a par four, so five par fours this time around. I don’t see that sort of scoring this week. Pin placements will determine what the scores are like, and also a bit of wind as well. With some of the tiers you can be a yard out and end up 80 feet away. It will be some patience required.”

John Catlin: “I knew I had a chance of getting in (to the US PGA Championship) but to actually get the final call and know I’m booking flights, telling my coach, family and friends about it. It’s awesome.

“I’ve never played at Kiawah Island. I’ve heard it’s a very challenging golf course, which I seem to do very well on, so I’m looking forward to the week and hopefully I can do well. The opportunity to play against the best is what we all want.”