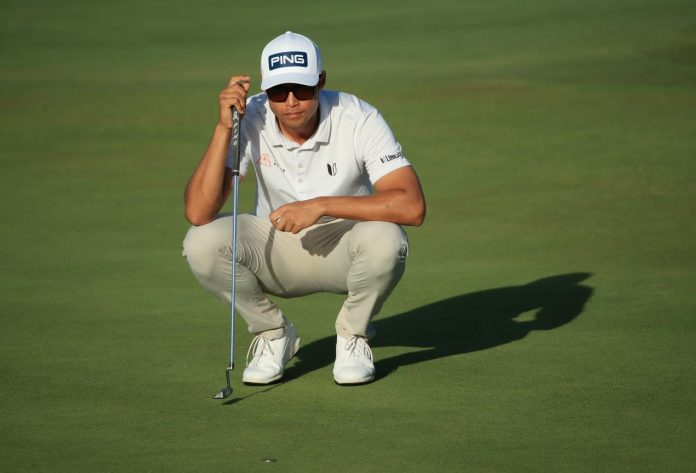 The image of Johannes Veerman must be credited to Getty Images and used in conjunction with this release only. Please click on image to download a high-resolution version. You can also download video content and tournament information at the European Tour Media Hub.

American Johannes Veerman and Mitch Waite of England share the lead at the Aphrodite Hills Cyprus Open after carding seven under par rounds of 64 in the first European Tour event to be held on the Mediterranean island.

Cyprus became the 50th nation to host the European Tour in its 48-year history as the first round began today, with Veerman and Waite edging ahead on a low-scoring day in Paphos.

Waite carded an eagle, seven birdies and two bogeys to sign for a 64, while Veerman joined him on that number after his fifth birdie of the day on the 18th hole, adding to an eagle he carded on the tenth hole.

In a share of third place on six under par are former Ryder Cup players Jamie Donaldson and Andy Sullivan, Joël Stalter of France and Finland’s Sami Välimäki – both winners on the European Tour this season – and David Drysdale of Scotland, who missed out on a maiden title in March after losing to Jorge Campillo in a play-off at the Commercial Bank Qatar Masters.

Ten players share eighth place on five under par, with two groups still to complete their first rounds after play was suspended due to darkness.

“It was a little windy in the practice rounds but it wasn’t so windy out there today. In a way, that made it a little bit easier from what we were used to on Monday, Tuesday and Wednesday and the course, it’s in such an amazing shape, it’s pristine. If you’re hitting your lines and you’re playing from the fairway, you can go low around here.”

Mitch Waite: “I feel very good, I played nicely today. I’ve just had a good attitude from the beginning of the week, I’ve got nothing to lose and everything to gain so I just need to get out there – it’s a scoreable track – hit some good shots and see what we get out of it.

“It’s easy to say no expectations but you’ve got to still go out there and do it. You tell yourself don’t play with any pressure but at the end of the day, when the covers come on and you’ve not been in that position before, there is a bit of pressure there and I was really pleased with how I finished up in those last three holes. I played nicely and I’m going to do some work on the range and get ready for tomorrow, more of the same.”

Jamie Donaldson: “Played nice today, played solid. Hit it pretty good off the tee and was able to get close to flags. It has been a beautiful day to be fair, there isn’t much wind and it is ideal scoring conditions.

Andy Sullivan: “I’m kind of waiting for it to go wrong out there. I’ve not done a massive amount of practice going into this week, but I’ve been doing a lot of work with my trainer. Physically I feel like I’ve got quite a lot of energy, I’ve been going to the gym quite a lot. Without practicing, I feel like my body is ready to play. I’ve been hitting it okay. Got off to a good start today and it’s picking up from Wentworth. I feel quietly confident about what I was doing out there, felt like I had good control. It was really nice, actually.”