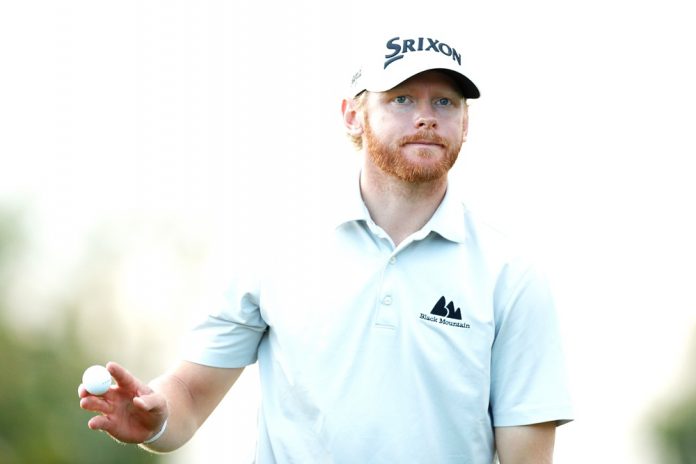 The Swede, who will defend his Omega European Masters title next week at Crans-sur-Sierre, made the turn three under par before play was halted for half an hour due to waterlogging after heavy rain in the Czech capital.

He then made his move after play resumed, going four under on his next three holes with two birdies and an eagle, before taking the outright lead with his seventh birdie of the day on the 18th, signing for a ten under par total.

The 30-year-old leads Sean Crocker of the United States and Poland’s Adrian Meronk, who both carded five under par rounds of 67 to sign for nine under par totals.

They sit one stroke ahead of 2016 Open Champion Henrik Stenson, who remains bogey-free after 36 holes on eight under.

Sebastian Söderberg: “I did play really well. I didn’t really get into trouble, except on 17 and I made a good up and down. It was a lot of fairways, a lot of greens, a few nice putts and a very solid day.

“I went four under in three holes right after the rain delay, so it worked out pretty good for me.

“It’s been a tough year so far, I decided to take a longer break this summer. It’s my first event in five or six weeks. I took a pass earlier with my swing coach, who I’ve been with for 13 years. I started to work with him again this summer and it’s feeling pretty good again.”

“On certain holes (my length) certainly helps – but I keep hitting it into the bunkers on the par fives. So it’s not really helping me too much.

“My putting is getting there. Each week that I’ve started working on it and finding what I need to do, it’s starting to click. My caddie and I are working on it every single day and it’s paying off. It’s nice to not have to rely on my long game and my iron play. My putter is saving me sometimes, which takes a lot of stress off my game.”

Adrian Meronk: “(The rain delay) was tricky. I was standing next to the green for half an hour. It was heavy rain and the green was flooded. We had to reset, start again and get some energy. It was quite a long day for us. We did quite a good job coming back.

“When we started I thought it was a bit easier than yesterday, less wind. I took advantage of it on the first few holes. Then with the rain it got a bit tougher and the last four holes we played in the sun, so it was up and down.

“We just try and get ourselves in position every week. I’ve had some good starts this year, I’m excited for the weekend and being in contention again – it should be a lot of fun.”

Henrik Stenson: “I think that speaks volumes of my putting, course management and some tidy shots around the greens when I have been missing. I definitely give my putting the biggest credit these first two days as to why we’re bogey-free and in a good position. There’s more to ask with the long game, but I still hit fairways and greens, I want a bit more than I have produced these two days, but we’re in good shape and I’m looking forward to the weekend.

“I was expecting to give it my best. I’ve got four tournaments to build some momentum to be in the hat that Pádraig is going to pick three names out of. I expected to give it my best and scoring-wise it’s probably better than I was hoping for coming in from three weeks off. I’ve done some practice but haven’t been playing a lot of golf on the course as of late, so it’s nice to be out there and keep the scores going in these first two rounds.”

Scores after Round Two: