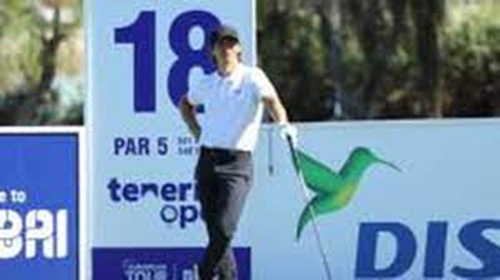 Thorbjørn Olesen carried his good form into the second event of the Canary Islands Swing, taking a one-shot lead after round one of the Tenerife Open, with last week’s winner Garrick Higgo amongst the chasing pack.

The Dane fired a nine under par round of 62 at Golf Costa Adeje, setting a new course record as the scenic venue was played as a par 71 for the first time. It was back-to-back records for the five-time European Tour winner, who shot a nine under par second round of 61 on the way to a tied fifth place at last week’s Gran Canaria Lopesan Open.

Higgo is aiming to pick up his third European Tour win, and his second in successive weeks, and he got off to a fine start in Tenerife with an eight under par round of 63 to sit in tied second place alongside fellow South African Dean Burmester, Sweden’s Alexander Björk and American John Catlin.

It could have been so much better for Catlin, who was ten under par through 16 holes, but a bogey-bogey finish ended his chance of recording only the second round of 59 in European Tour history.

Eduard Rousaud is the leading Spanish player at seven under par, playing in just his second European Tour event as a professional, with the 20-year-old former world amateur number two joined at two shots off the lead by Robin Sciot-Siegrist of France, Finland’s Kalle Samooja and German Nicolai von Dellingshausen.

Joost Luiten of the Netherlands is one of seven players one shot further back, recording his second hole in one in two weeks on the par three second hole.

Thorbjørn Olesen: “I think the first nine holes was the best putting display I’ve shown for a very long time – I just had to look at it and it went in. That was a great start to a round then I played solid on the back nine and was really happy to finish with a birdie on the last after that bogey on eight. It was definitely the putting that was the main thing.

“I was very happy to finish top five (last week), that was amazing. I haven’t been that high on a leaderboard for a very long time; being in contention again was a great feeling and something I’ve missed very much for the last few years.

“I don’t set high expectations now. I found something last week and was making birdies. Today my putting was great and no wind to start made it a bit easier. ”

John Catlin: “I got off to a really nice start on my front nine, the back nine. I made five birdies in six holes, I think my longest putt was four feet. It started to get really special around the fifth. I felt confident in my game. It was unfortunate to finish the way I did, but I’ll take the positives. We have three more days so we will see where everything settles.

“It’s hard not to have 59 in your mind. You just keep pushing forward. I was still able to execute good golf shots. I had some good chances coming down there on both the par threes. It’s the first real opportunity I’ve had at a tournament to shoot 59. I didn’t get it done this time, but who knows what’s going to happen in the future.”

Garrick Higgo: “I kept it going from last week. Good scoring straight into today – four under through four. This game is hard, sometimes it’s hard. I’m just trying to ride the wave.

“It’s similar grass (to last week’s course), although this is a bit more similar to what we play on back home (in South Africa). The greens are fast – I like a bit of spice. My form is good so I am just trying to do the same things.”