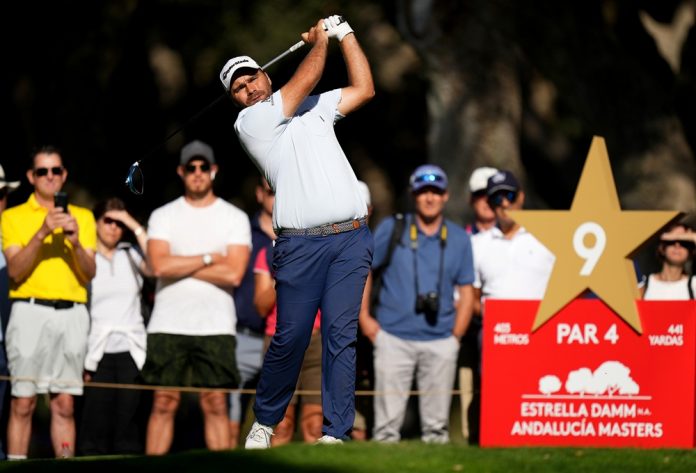 The 26-year-old, winner of the Amateur Championship in 2015, is one stroke ahead of a group of four golfers, with just 12 players under par after 36 holes on one of Europe’s most formidable courses.

Laurie Canter signed for the lowest round of the week thus far, a six under par 65, to share second on three under with compatriot Matt Fitzpatrick, who is making his first start since his Ryder Cup appearance at Whistling Straits, New Zealand’s Ryan Fox and Sebastian Söderberg of Sweden.

Two-time European Tour winner Alejandro Cañizares, who is also a member at Real Club Valderrama, is the leading Spaniard, sharing sixth with three others on two under par.

Romain Langasque: “I played really solid again today, like yesterday. My long game is very good – my driving is really good – I drove a good one on 17, hit a good second shot just over the green and made a long putt for the eagle. That was the bonus for the day. Even without that it would have been a good day.

“The wind was better today, but even without wind it’s still a tough course. You have to find good places. The greens were quick this morning – I feel it was a bit tougher than yesterday on them. I didn’t make many mistakes, that was the key for today. I stayed really patient and had a lot of pleasure. That was the most important thing.”

Laurie Canter: “The front nine I didn’t really miss a shot. There was a couple of holes we deliberately played away from, trying to hit it to 20, 25 feet, and then a couple where there’s a window to get it close. I thought the pins were more generous than yesterday but even so, I was obviously delighted to go out in five under which is great round here. The perfectionist in me would have liked to play the last three holes better.

“I made a bad swing off 16 and then that maybe slightly took me out of the flow I was in. Up until then it was probably the best 15 holes of golf I’ve played on Tour. I’ve had lower scores out here but in terms of control of the golf ball and on a difficult course with quite challenging conditions, certainly on the front nine, it was really, really good.”

Matt Fitzpatrick: “I played great. There’s no other way to describe it. I was really solid. I barely missed a green and a fairway. I putted pretty solid too. I’m not really disappointed. It’s a tough way to finish, but I feel like I’m playing well – I just have to keep it up.

“It’s all about patience. It’s not trying to be too greedy. Plotting your way around, hitting the right areas. If I hit 36 greens in the last 36 holes, I’ll be absolutely delighted and I’d be surprised if I didn’t win the trophy. You just have to plan your way around, be smart, miss it in the right spots when you can and then just be patient.

“I’m happy with where my game is at. I played really well at the Ryder Cup, to no avail, unfortunately. But I was really pleased and almost disappointed to have two weeks off after it. I wanted to play again. So to come here and continue that is a positive.”

Ryan Fox: “My patience and the score (has pleased me most). This place has beaten me to a pulp the last time I played it. I came in with no expectations whatsoever. You know you get some bad bounces and a few funny things happen around here, I’ve just gone with the flow and that’s helped me a lot scoring-wise. On top of that, I’ve hit the ball solid the first two days.”

Sebastian Söderberg: “On the first 11 holes I thought I could have shot a couple lower. I was hitting the driver great, hitting a lot of fairways. Giving myself short irons and wedges. Then I got off a little bit on the back nine and it goes quickly when you have to fight for your pars. You have to stay sharp.

“Definitely a little bit easier (today). I think the morning greens were a little easier to putt on. You are still in as much trouble if you’re off-line. It’s a shot or two easier, but overall you can never relax.”

Scores after Round Two