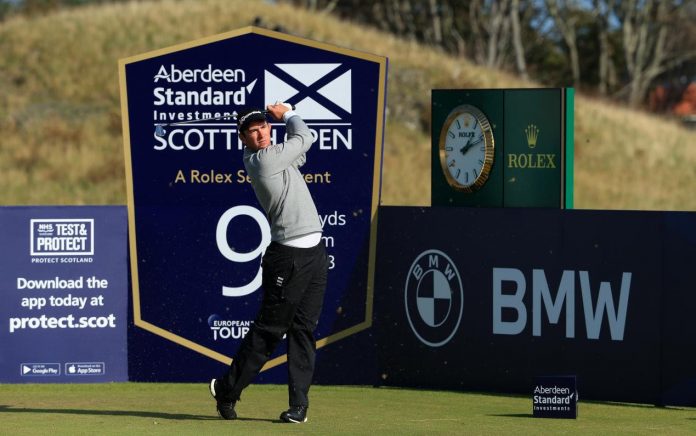 The image of Lucas Herbert must be credited to Getty Images and used in conjunction with this release only. Please click on image to download a high-resolution version. You can also download video content and tournament information at the European Tour Media Hub

Lucas Herbert made the most of favourable conditions to take a one shot lead into the weekend at the Aberdeen Standard Investments Scottish Open.

The Australian added a second round of 65 to his opening 66 at The Renaissance Club to top the leaderboard at 11 under par as he goes in search of a second European Tour title in 2020 following his victory in Dubai in January.

Poulter carded 66 on Friday to move to nine under par alongside his playing partner and overnight leader Westwood, who followed Thursday’s brilliant 62 with a 71.

The 51-year-old has been one of Europe’s most recognisable figures for close to three decades in a playing career that saw him become a champion on eight occasions – including the 1999 Open Championship at Carnoustie – as well as representing Europe twice in The Ryder Cup.

Lucas Herbert: “I’m pretty happy. To be honest I turned up here on Wednesday and hit it all over the place. Sort of not really expecting too much the last few days, but it’s kind of all come together nicely.

“Links golf is a lot of fun and it’s definitely a different challenge from probably what we play most of the year. It takes some imagination and I feel like I’ve got a fair bit of that, so it’s good fun. You come back here every year and you kind of learn new things and add to your knowledge about the golf course, things that you just don’t spot the first time around, so the more times you can play it the better.

“A second victory would be great at the moment, but yeah, Rolex Series would be pretty cool. I would like to look at Johnny walking around with a gold caddie bib on, so that’s definitely something that I’d like to do. Really haven’t played that well in the Rolex Series so far in my career, so it would be a good step forward this week to put in a good result, whether it’s a win or whether it’s a top 10 or a top 20. I think that would be a good step forward.”

Robert Rock: “Yeah, to finish at 4-under, I’m quite happy with that. I kept plodding along, and thankfully with no bogeys, you pick them up every now and again and it adds up to a decent score, doesn’t it. I hit a couple iron shots close. I didn’t really hole many putts, but yeah, an easier day.

“I’m relaxed. As I said yesterday, I just try to enjoy the tournaments that I have left. I might not be playing many more Scottish Opens or Irish Opens, so I’m determined to enjoy them at least.”

“I felt I kind of moved the ball around the course pretty good, put myself in decent positions and holed a couple of nice putts at the right time, and I felt that was a decent reflective score for today.

“We’ve had two great days of weather — well, my side of the draw has certainly had the right half of it, and obviously yesterday morning was pretty tough for the guys. But it’s fun, trying to land it 20 yards short, pins feeding in on some of these ridges, and it’s always interesting to come and play links golf.”

Lee Westwood: “I was actually pleased. I felt like I didn’t have much go my way. Missed a couple of short ones early on 11 and 12, hit it in the bunker on 16, which was the only place you couldn’t go, made six in the end. Ran a lot of putts close. And when I did hit it slightly off-line, instead of finishing just in the semi, it would finish in the thickest possible clump I could find.

“Pleased that I stuck with my game plan, and 71 feels like an all right score. They toughened the course up. They put the flags on the side of hills. The pin positions were noticeably tougher, so I can only apologise to everybody for shooting 63 yesterday.”

Paul Lawrie: “I would say that I’ve obviously been fortunate enough to have been a decent player, to have won a few, and every win is special because I never thought I’d win any to be honest. Never thought I would play in any, never mind win any.

“The Open was out of this world and to have your name on that is unbelievable. So been a great time. Had a blast. But today shows exactly why I’m doing what I’m doing. I can’t play at this level, when my back’s terrible, my left foot’s been sore this last couple of days which it hasn’t been sore.

Round One: No bad times

Round Two: No bad times