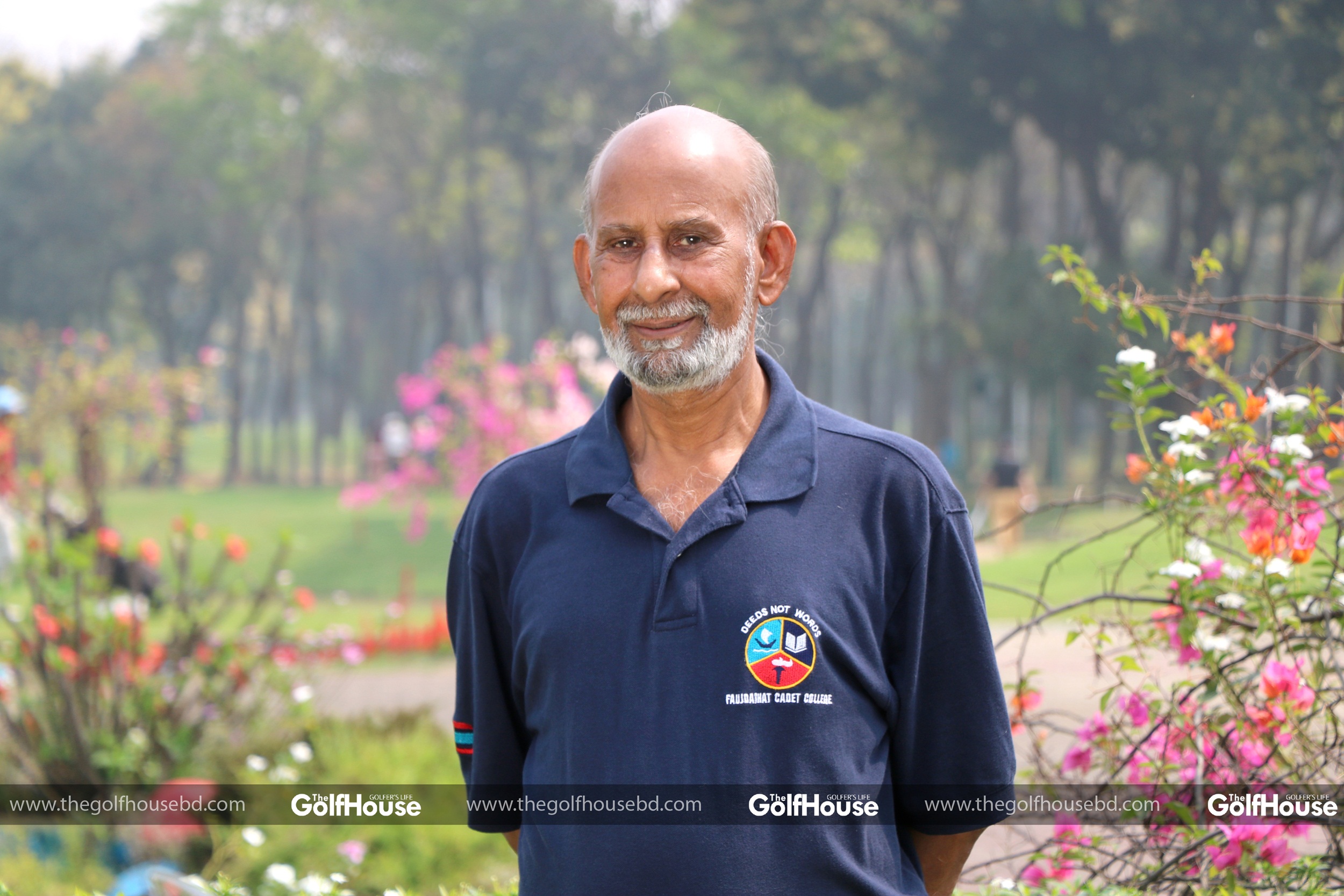 Amsa Amin, a retired Major General and a former Ambassador, is one of those who saw many things well ahead of his time. For instance, when golf was still very much a game confined to cantonments and among the military officials, mainly in Dhaka and Chittagong, he saw the potentials of growth of the game in other parts of the country as well. He felt the need to spread the game all over the country. He founded golfing in remote places like Rangpur over three decades ago. He has even started introducing golf among school children in Kurigram.

A veteran, who now devotes his time to championing democracy and moral regeneration, plays golf regularly. He feels that it is the best recreational sport that can contribute a lot to a man’s physical and mental health, especially in the old age.

TheGolfHouse interviewed him recently. Here is the excerpt.

Q: How long have you been playing golf?

A: When we were young officers, there was no scope to play golf. In those days no one below the rank of Brigadier General was allowed to play golf. I started golfing in around 1982. Later, when I was in Bhatiary as Commandant of the Bangladesh Military Academy in 1988, I was made Vice President of Bhatiary Golf and Country Club (BGCC). From then on, my close association with golf and golf administration started. Later, when I was in India in the Indian National Defence College, I played in Delhi Golf Club as well as many other Golf Clubs in India. When I was posted in Rangpur as GOC in 1991, I started thinking about introducing the game to our young officers. It was a daunting task. Yet we looked around for some available space and found that five holes can be set. I had also looked for some land in Kholahati, the upcoming new cantonment, and reserved some space so that a golf course can be built in future. Now it houses a bridge.

Q: What were the challenges in those days?

A: There were a lot of reservations. People questioned- who would play golf in Rangpur? More so Rangpur was a small station. The cantonment was divided in three distant parts with officers spread all over. There were no expertise and no funds to foot the bills. It was considered expensive and no one had golf sets. It was not a popular game. Despite many other issues, when I broached the idea, the then CAS and the President of KGC, General Nooruddin encouraged. The officials and the staff of KGC helped. I’m happy to see the present development of Rangpur Golf and Country Club (RGCC). Now it has a picturesque 18 hole setting around the Ghagot River. Major General Syed Fatemi Ahmed Rumi, Major General Abul Kalam Md Humayun Kabir, Major General Ehtesham Ul Haque, Major General Sabbir Ahmed and Major General Salahuddin Miazi had played key roles in developing RGCC. Present GOC, Major General Md. Masud Razzaque is an avid golfer and is doing his best. Brigadier General Abul Fazal Md Sanaullah and many others before him worked hard to bring up RGCC to the present shape. I appreciate their spirit.

Q: So how was the five-hole course established?

A: first I encouraged my officers to take interest in golf during holidays and free time. When I found response I sought support from KGC. We were assisted by the then staff to help set up the course, design and construct the tees and greens.

Q: Rangpur will soon become a business hub. Do you feel happy that you foresaw the development of the region such a long time ago?

A: Yes, Rangpur is a historical and old city with a rich heritage. It’s now a civil divisional headquarter. A lot of the population is moving from neighboring districts. A lot of business opportunities are being created. The city now has rich healthcare facilities. The defence forces establishments have gotten bigger and better. A lot of civilians– officials, doctors and businessmen are becoming members of RGCC. Over time, hopefully Rangpur will become an attractive golf destination for keen golfers. Golf can be developed even in Kurigram. The beautiful banks of the river Dharola, its bends and large tracts of char lands and spaces offer a picturesque landscape and setting for a full fledged 18 hole golf course. Land ministry support and private investment can help develop Kurigram Golf and Country Club as a golf tourism destination and help boost the local economy and employment as well.

Q: What is it about golf that attracts you most?

A: I play regularly even though I’m not a good golfer. As long as you can walk and swing your arms, you can play golf even when you are very old. Moreover, as one gets older, one needs some healthy recreation and light physical exercise. Golf is good in this respect. Besides, golf is a very attractive sport and popular as well.  It’s a game of skill, both mental and physical. You need to plan for every shot, even for small putts. You need to have extraordinary reflexes to act in split seconds. You may find golf hard to pick up in the beginning. It does throw up challenges. You are actually playing against yourself, not against anyone else. This makes golf a unique game.

Q: How much do you think the game helps in building character?

A: A great deal indeed. The manners, etiquette, fairness and discipline in golf are very important. In amateur golf competitions honesty and integrity are vital. Sometimes no one is watching you counting your scores. Correctly reporting scores for handicap fixing demands honesty. If one cheats, one is not a golfer. Thus self discipline is vital for a good golfing image. There are many other things like patience, perseverance, dedication, etc. can help character building

Q: TheGolfHouse is promoting the tagline that golf would be the second biggest sport of the country by 2025. Do you think the target is realistic?

A: It is an ambitious target for a developing country like us and will be hard to achieve. The first thing necessary is to develop a lot of golf courses. This needs large open spaces and lots of investment. Then you have to have a good communication and a transport system. Furthermore, since this is an expensive sport, you need to have enough affluent people and a burgeoning economy to support the game’s growth. The game is now played only in the cantonments. There is a need to develop a lot of facilities all over the country. Of course this game offers great opportunities to earn foreign exchanges as well. Good golf professionals can earn reputation and money not only for themselves but also for the country.

Q: What do you have to say about senior golfers?

A: This is a very environment-friendly game and senior/veteran friendly game. While Dhaka is one of the most polluted cities in the world, golf brings a respite and helps you breathe fresh air. Handicap system is also very helpful for seniors like me. However, the younger generation should be encouraged to play golf as well. Often people say this is a game for the elite only. But you can see a lot of good golfers and professionals are coming from the underprivileged families. So people of all ages and classes should be encouraged to play this game. There can be a system to hunt for golf talents who can bring name and fame for our beloved motherland.

Asian Tour Sub Editor - March 3, 2021
35
dee successfully defended his Malaysian Open crown on this day, 16 years ago.  Perhaps, more than any of his victories – to date he...