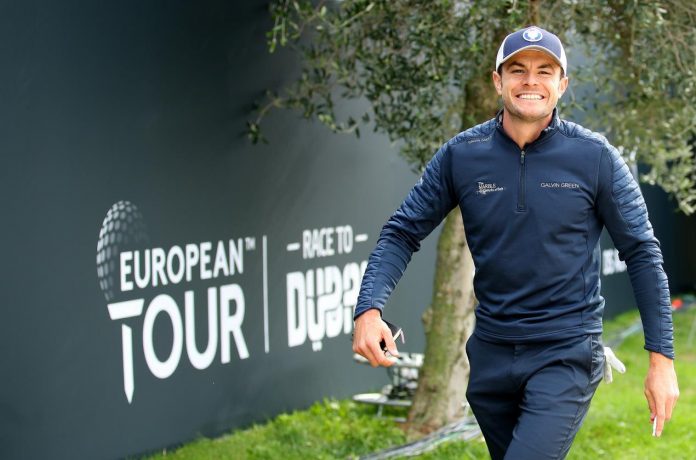 The image of Laurie Canter must be credited to Getty Images and used in conjunction with this release only. Please click on image to download a high-resolution version. You can also download video content and tournament information at the European Tour Media Hub.

Laurie Canter got off to a spectacular start at the Italian Open, as the Englishman carded a 12 under par opening round 60 to take a four-shot lead at Chervò Golf Club.

The 30-year-old carded ten birdies and an eagle and threatened the magic number of 59 in Brescia. An eagle three at the par-five 18th hole would have put him alongside his countryman Oliver Fisher – the only man to have carded a sub-60 round in European Tour history – albeit due to placing on the fairways the score would not have been official .

Canter couldn’t reach the green in two, but still holed a 25-foot putt on the last for a closing birdie. That earned him a four-stroke lead, the largest first-round lead of the season, with Denmark’s Joachim B Hansen and South Africa’s Dean Burmester in a share of second place on eight under par following a pair of 64s.

World Number 35 Bernd Wiesberger got his title defence off to a solid start as the Austrian signed for a five under par 67 while former World Number One and two-time Major winner Martin Kaymer opened his account with a three under 69.

Laurie Canter: “It feels great. The score, days like that, the back nine there, everything’s gone in. I gave myself some chances and it was just one of those days where you’ve just got to enjoy the ride.

“I did say to Jamie in the practice round that I thought this was somewhere I could do well. I think it’s playing quite long and it definitely helps being able to hit it straight and that’s something I’ve been able to do most of this year so far. I like the golf course but I think obviously a lot of things have gone right today to help me shoot that.

“Winning, you need a lot of things to go your way. Portugal, I felt like I did about as well as I could that week and come second. I’ve had other weeks where I’ve felt the same and come tenth, so the standard is good. So for me to win, and for me to say I feel ready to win, I feel like I’m jumping the gun. You play as well as you can for four days and hopefully it’s your week. You do need things to go your way, I feel, to win.”

Joachim B. Hansen: “Just the round I was looking for. A bit lower than I expected, but you’ll always take eight under. My putting was really good – holed a lot of putts. My irons were really good as well. The only thing I consider that went wrong was the driver – I could have hit a bit more fairways.

“The short par five on the sixth hole, and the other par fives are reachable. There’s a lot of opportunities. I worked on ball striking, hitting the ball more in the middle. When I hit it in the middle of the club, I produce good shots. I just need to do that more.”

Dean Burmester: “Today was a good day. Golf is a funny game. Eight under with no bogies, I’m delighted. I’ve been playing well. Like I said, golf is a crazy game. I’ve been suffering a little bit with anxiousness since Ireland. I think I just put too much pressure on myself. Coming into this week I just said, you know what I’m just going to give it all up and whatever happens, happens. If the ball goes in the hole, great, if it doesn’t, that’s OK. Clearly that kind of mentality works.

“I don’t have a score (in mind for tomorrow), but I think 12 under is a hell of a round (from Laurie Canter). When I saw that, I thought he had shot 59 because I didn’t realise the one on the front nine was a par five. When I got up there and looked at the scorecards and saw it was a par five, I was like, damn I feel for him it’s a 60. I think 59 is on the cards and hopefully somebody can do it this week.”