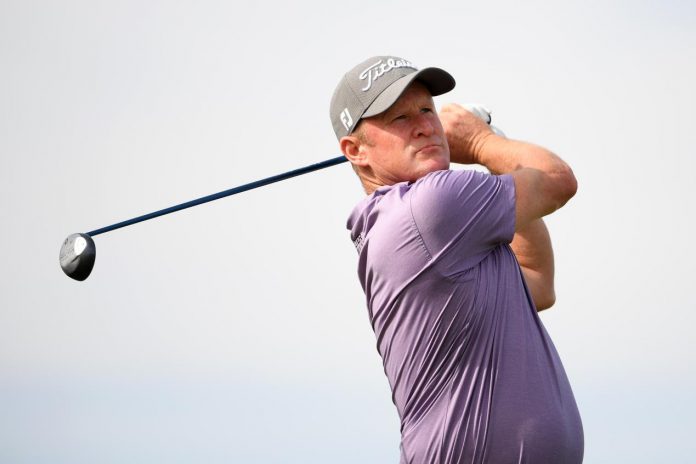 The image of Jamie Donaldson must be credited to Getty Images and used in conjunction with this release only. Please click on image to download a high-resolution version. You can also download video content and tournament information at the European Tour Media Hub:

Marcus Armitage and Jamie Donaldson share the lead at the Aphrodite Hills Cyprus Open on 11 under par but will need to complete their second rounds on Saturday morning as play was suspended due to fading light.

The pair will return to the course at Aphrodite Hills Resort at 8:00am local time to finish their rounds. 2014 Ryder Cup star Donaldson has one hole to finish, with 33-year-old Armitage still to putt-out on the 16th green. Welshman Donaldson is five under par for his round while Armitage, of England, is six under.

In a share of third place on ten under par are Scotland’s David Drysdale, Englishman Richard McEvoy and Finland’s Sami Välimäki. Drysdale is playing in his 509th European Tour tournament and would equal Malcolm Mackenzie’s record of events before earning his first victory if he were to win this week.

Välimäki, in his rookie season on the European Tour, is seeking a second win on the 2020 Race to Dubai after earning his maiden title at the Oman Open in March. McEvoy is looking for a second European Tour success to add to his 2018 Porsche European Open win.

Sharing sixth place on nine under par are six golfers including Frenchman Benjamin Hébert, who carded the lowest round of the day, a seven under par 64, and India’s Shubhankar Sharma, who has made his sixth consecutive cut.

David Drysdale: “I’ve been working hard. To be honest I had an injury when I came back. I missed four or five events. Trying to get fit and regain some form. My scores haven’t been great but I’ve been starting to see nine holes where there has been good ball striking – that’s trending a bit.

Richard McEvoy: “Yesterday was probably actually slightly better. Tee to green I was very, very strong yesterday. I missed two fairways and one green all day so I gave myself plenty of chances. The today, a couple more small mistakes, I missed a couple more greens, but the short game was good to get out of trouble when I needed to.”

Benjamin Hébert: “The greens were much better this morning because yesterday they were a little bit marked by the end of the day so it was pretty hard to hole putts. My iron shots were pretty accurate so everything was alright.

“There is still two more days so you never know. Moving Day tomorrow will be important. The course is in very good condition and it’s a good week. I think everybody is enjoying it a lot and let’s keep this momentum.”

Shubhankar Sharma: “As professional golfers this is what you strive for, you want to be in the mix going into the weekend. It’s been a while since that has happened. I felt that at the Scottish I was quite close, I was 13th after two days. My game was coming around. The Scottish wasn’t too many weeks back. I’m really happy to be in this position and I’m looking forward to the weekend.

“Experience plays a big role. This is my third year on Tour and I’ve been in this situation many times before – that will definitely help. But, on this course, anyone can shoot a low number. If there’s no wind and it’s calm, I think there’s a ten under out there. These players are really good. You just have to stay on your toes, keep firing away and see what happens on Sunday.”