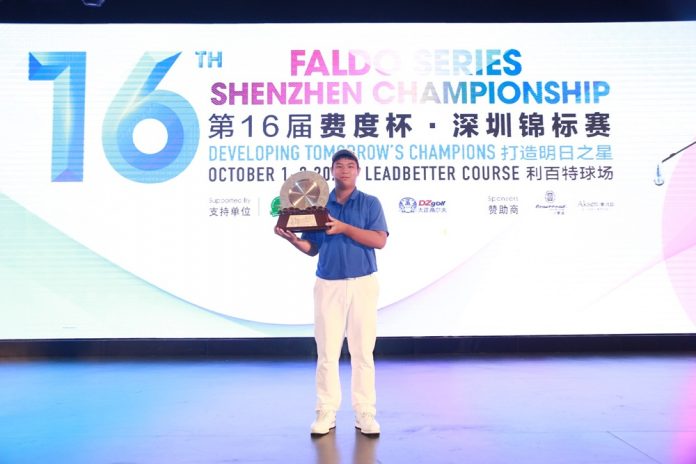 An assured bogey-free closing four-under-par 67 over the Leadbetter Course at Mission Hills Dongguan set the seal on a victory that will see the 15-year-old move closer to breaking into the top-30 in the China Golf Association’s junior rankings and the leading 1,000 in The R&A World Amateur Golf Ranking.

Added to earlier returns of 66 and 70, Zhang’s three-day aggregate of 10-under-par 203 gave him a five-stroke winning margin from fellow Under-16 participant Huang Zijie.

Winner of numerous junior events in the southern China province of Guangdong, it was the second significant success for Zhang at Mission Hills having captured the overall boys’ title at last year’s Mission Hills Jack Nicklaus Championship.

Huang proved a worthy opponent, claiming the opening-day lead with a 65, the best return of the tournament. On day two he battled back from a triple-bogey seven on the first hole to post a one-over 72 to trail Zhang by just one stroke heading into the final day.

In the concluding round it was a four-hole stretch commencing at the par-four fifth that turned the tide decisively in favour of Zhang.

Having extended his advantage at the top of the leaderboard to two with a birdie at the fifth, Zhang pulled clear when his rival dropped shots at the long sixth and par-four eighth. With Zhang continuing to churn out pars there was no way back for Huang, who could take comfort from being the only player apart from Zhang to better par over 54 holes.

Thanks to his latest triumph, Zhang can now look forward to a trip to Vietnam’s Laguna Golf Lăng Cô for the 15th Faldo Series Asia Grand Final, to be hosted by Sir Nick Faldo in 2022.

Six-time Major champion Sir Nick, Founder of the Faldo Series, said: “Congratulations to the winners and all those who took part. After the challenges of the past 18 months, I’m delighted to see the resumption of Faldo Series Asia tournaments. My thanks to Mission Hills for making it possible to welcome back the Faldo Series Shenzhen Championship to the schedule.”

The 2020-21 Faldo Series Asia season is supported by The R&A and endorsed by the Asian Tour and the Asia-Pacific Golf Confederation.

As well as a series of qualifiers in Thailand, events are planned in Australia, Bangladesh, India, Indonesia, Japan, Malaysia, Nepal, the Philippines, Singapore, Thailand and Vietnam over the next few months, subject to prevailing conditions and circumstances.

Recognised as the only global amateur series for boys and girls, the Faldo Series was established in 1996, expanding to Asia in 2006.