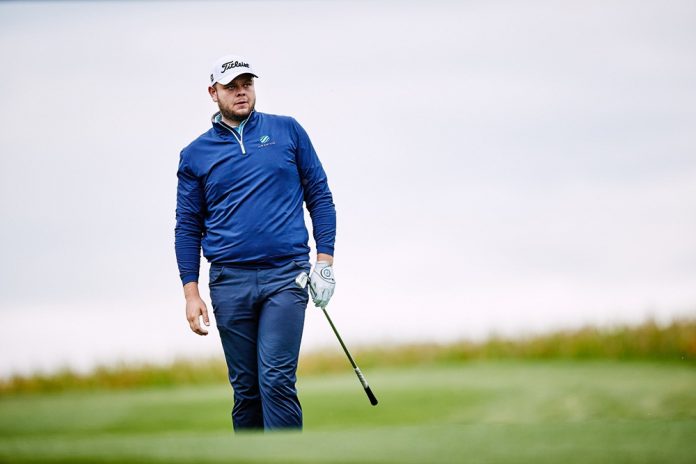 The Englishman arrives at Empordà Golf after a second place finish at the Swiss Challenge two weeks ago, and admits that he is still taking the positives from his memorable debut at The Open in July. A hole in one on the par three 16th was the standout moment of Thomson’s week at Royal St George’s, but he feels the experience of playing alongside former World Number One and reigning Race to Dubai champion Lee Westwood and American star Harris English over the weekend was the biggest benefit.

“Yeah, it was massive, (playing at The Open)” he said. “I think one of the biggest things for me was that I played with two massive names at the weekend – Lee Westwood on Saturday and Harris English on Sunday.

“Being able to compare your game a little bit towards those guys, it’s invaluable.  These guys are playing week in and week out, they’re playing in all the Majors every year and they don’t do much different to you, so you’ve just got to start to believe in yourself and try and get some results. Things can escalate in this game quite quickly either way – you can gain a lot of confidence and you can lose a lot of confidence really quickly. It was a big week for me, it gave me a real boost.”

Thomson, otherwise known as Jigger, admits that he was disappointed with his early season results, but the way everything came together as he finished one shot behind Marcus Helligkilde at the Swiss Challenge, could be a crucial turning point.

“So far this year, especially down in South Africa at the start of the season, I feel like I played some pretty good golf. I didn’t get any results out of it and then I struggled a little bit mentally with the travel side of things being very difficult this year.

“Obviously, I had a great week in France (at the Swiss Challenge) to move me up the Rankings, but I’ve been playing some good golf now for a fair few weeks and literally just getting nothing out my game, so hopefully this is the turning point.

“Tee to green in the last seven or eight events I’ve played, I think statistically it’s been awesome, I’ve just holed absolutely nothing. I was burning the edges of the hole for fun and then all of a sudden they start to drop and I’m 24 under par and I was gutted I didn’t get it over the line for the win, but I think there’s some good events around the corner.”

Road to Mallorca Number Two Ricardo Gouveia joins Thomson in the field this week as he looks to cement his European Tour card for the 2022 season after recording two wins this year, while Helligkilde of Denmark and Spaniard Alfredo Garcia-Heredia will also tee it up at the Empordà Challenge following their recent victories.