It was sponsored by Mutual Trust Bank. The special tournament was arranged by the DOGS (Dhaka Oddballs Golf Society) which is a club within the mighty Kurmitola Golf Club (KGC).

The Rover Cup is played in the same style as the famous Ryder Cup (Europe vs USA), the only difference is DOGS play the whole event in one day condensing a major tournament into 27-holes. Being a paired team event of 9-holes greensomes (all hit and then select best drive and then alternate hits to hole out); 9-holes of four ball better ball with the best score of the pair being the team score and finally single matches over 9-holes.

In the case of the DOGS’ Rover Cup for the first two years it was Europe vs USA but later on it became Europe vs Rest of the World.

This year the Rest of the World (ROW) victorious over the EUROPEANS 18.5 points to 9.5 points.  That is worked out with each team or individual win over the 9-holes amounting to just 1 point.

The DOGS began in the year 2000 and although players come and go they maintain and annual active membership of 40 to 50 players and they play at the KGC each Saturday.

Points are awarded a ‘1’ for a win and ‘0.5’ if it’s all square. There are 18 matches of teams of two playing each other and 18 single matches of one player against the other. So a total of 36 points up for grabs.

This year saw the Rest of the World (ROW) victorious over the EUROPEANS 18.5 points to 9.5 points.  That is worked out with each team or individual win over the 9-holes amounting to just 1 point.

DOGS and CATS formed about couple of years ago. The DOGS is an organization and it is already become a brand golfing group. DOGS refers Dhaka Oddballs Golf Society. Since 2000, it used to known as Dhaka Oil and Gas Society. It was a part of Dhaka Oil Golf Society involved with the people from oil and gas industry. But it has quickly changed. Now, it includes wide range of sectors like- ambassadors, High Comissioners and also from other professions. Here, they try to play golf in Bangladesh. They always encourage others to play golf and they have a worldwide network. DOGS always enjoys and encourages to play golf. 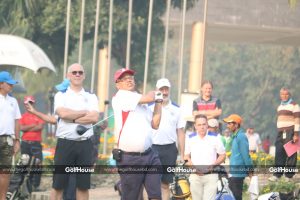 Gary Lye, Chief Executive Officer of Asia Energy Corporation (Bangladesh) Pty Ltd. is the Co- ordinator of DOGS and they used to called it as the Top DOGS and they have also many senior players for doing presentation and organizing the games and so on.