The LPGA – Ladies Professional Golf Association – was founded in 1950 by 13 women. Those 13 LPGA founders met, set down bylaws, elected officers (Patty Berg was the first president), hired Fred Corcoran (Babe Zaharias’ business manager) as tournament director, and set out organizing, running and playing in tournaments. There were 14 tournaments in that first season of existence. Below are the names of the 13 LPGA founders, along with a little info about each. 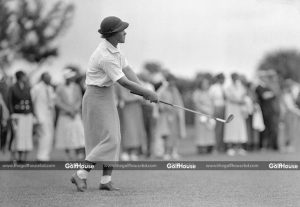 Bauer, who died in 2002, never won on the LPGA Tour she helped create. Alice and her little sister, Marlene (see below), were golf phenoms in the 1940s. Their star power made them part of the founding group of 13. Alice was 22 at the time, and the LPGA states that she played the tour rarely after its founding in order to stay home with her children. The closest she came to winning was at the 1955 Heart of America Tournament, where she lost in a playoff to her fellow LPGA founder Marilynn Smith.

Better known today by her married name, Marlene Bauer Hagge, Marlene was the sister of Alice Bauer. And in 1950, when Marlene was part of the founding group, she was only 16 years old. Does that seem young to part of something momentous? It was old-hat to Bauer. The previous year, at age 15 in 1949, she was the Associated Press Female Athlete of the Year. Bauer won 26 times on the LPGA Tour and was voted into the World Golf Hall of Fame in 2002. Read more about Marlene Bauer Hagge.

To this day, Patty Berg holds the LPGA Tour record for most major championshipswon (15). Many of those were prior to the existence of the tour she helped found, as were most of the 60 LPGA victories with which she is credited. Despite many of those wins coming prior to the LPGA’s founding, the LPGA does recognize them as official tour wins, as it does for other women golf pioneers who played professional golf prior to the LPGA’s founding. Berg was winning tournaments now recognized as majors as far back as 1937. Her last LPGA win was in 1962. She joined the World Golf Hall of Fame in 1974. She died in 2006. Read more about Patty Berg.

Bettye Danoff, according to LPGA.com, was the first grandmother on the LPGA. She also once won a case of beer for making a hole-in-one during a LPGA tournament. Danoff won tournaments in the 1940s, both amateur and professional events, while still an amateur. She turned pro in 1949, then helped found the LPGA in 1950. She never won a LPGA event after helping found the tour, and later became a successful golf instructor. She died in 2011 at the age of 88.

Helen Dettweiler, who died in 1990, was involved in the women’s professional tour that preceded the LPGA – the WPGA (Women’s Professional Golf Association). After that tour couldn’t make it, Dettweiler joined 12 other women to create the LPGA. She won the Women’s Western Open in 1939, and won tournaments in the 1940s, but never won on the LPGA Tour. Dettweiler turned to teaching, and in 1958 she was the first-ever recipient of the LPGA Teacher of the Year Award.

Helen Hicks was one of the first women golfers to turn professional and try to make a living through golf. And she did OK: Nearly all of Hicks’ victories were in the 1930s and 1940s, but she was winning as far back as 1929. She turned pro in 1932. In 1934, she signed an endorsement deal with Wilson Golf and became the first female golfer to travel the country, promoting a brand through golf clinics. Her victories included the 1937 Women’s Western Open and 1940 Titleholders, wins now recognized as majors. Hicks was already near 40 years old when she co-founded the LPGA. She died in 1974.

Along with the aforementioned Hicks, Opal Hill was one of the true pioneers in professional golf for women. Born in the 19th century, Hill was winning amateur tournaments in the mid-1920s. Her biggest wins included the 1935 and 1936 Women’s Western Opens, titles now recognized as majors. Like Hicks, Hill signed with Wilson Golf after turning pro and barnstormed the country giving clinics. Hill was not a factor as a player on the LPGA she co-founded – she was already 58 years old at the time – but her inclusion among the founders was important because of her standing in the golf world. According to the LPGA, Hill was known as the “matriarch of women’s golf.” Hill died in 1981.

Betty Jameson wasn’t just one of the founders of the LPGA. In 1952, she donated the trophy to give to the tour’s leading scorer and requested it be named in honor of her hero, the great amateur Glenna Collett Vare. The Vare Trophy is still awarded annually to the LPGA Tour scoring leader. Vare never had a chance to play on a women’s professional golf tour; Jameson did, and thanks to Jameson and her LPGA co-founders, so have generations of women golfers to follow. Jameson won 13 LPGA Tour titles, including three major championships, but much of her best golf was prior to the founding of the LPGA. Her last LPGA victory was in 1955 and she retired from full-time golf competition after 1962. She died in 2009. Read more about Betty Jameson.

Sally Sessions may be the least-known member of the LPGA’s Founding 13. She died in 1966, and was never a factor in tournaments after the LPGA founding in 1950 – that was because Sessions had leukemia and her golf performance started to tail off in the late 1940s. Prior to the onset of the disease, Sessions produced great results around her home state of Michigan and finished second in the 1947 U.S. Women’s Open.

Marilynn Smith is probably one of the most-liked golfers in LPGA Tour history; her nickname, “Miss Personality,” was not an ironic one. Of all the LPGA founders, Smith’s career lasted the longest – at least in terms of remaining competitive on the tour she helped create. Smith scored the first double-eagle in LPGA Tour history in 1971; won for the last time in 1972; and played in a LPGA event for the last time in 1985. She also has the distinction of being the first female broadcaster to work a men’s golf telecast in the U.S. Read more about Marilynn Smith.

Shirley Spork is a co-founder twice over. She is one of the 13 LPGA founders; she is also one of a small group of golf instructors who founded the LPGA T&CP – Teaching & Club Pro – Division (so was Marilynn Smith). Spork also came up with the idea of awarding a LPGA Teacher of the Year honor. So it only makes sense that she won that award twice herself, first in 1959 and again in 1984. Spork is best-known as a teacher of the game; she never won a LPGA tour event. She did make a mark as a competitor, though, by winning the “National Collegiate Championship” in 1947, the first playing of what later evolved (in an indirect line) into the NCAA Championship. 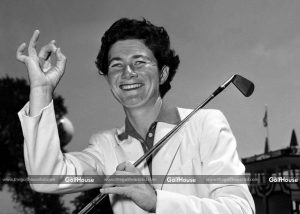 Called “Miss Sluggs” because of her length off the tee, Louise Suggs was one of the dominant players in the first decade of LPGA history. She also famously feuded with her LPGA co-founder, Babe Didrikson Zaharias, although Suggs has always acknowledged that Zaharias’ fame is what kept the LPGA afloat in its infancy. Suggs, a World Golf Hall of Fame member after whom the LPGA Tour’s Rookie of the Year Award is named, is credited with 58 LPGA wins and 11 major championship wins. Read more about Louise Suggs.

Babe Didrikson Zaharias was arguably the greatest female athlete of all-time; she was inarguably the most important golfer in the early history of the LPGA. Her star power is what kept the LPGA going during its first few years of existence. She was known to call a promoter, negotiate an exhibition appearance for herself, and then say, “And I’ll bring along a few of the girls.” Voila – that’s how some of the early LPGA events were born. Alas, Zaharias was the first of the LPGA founders to pass on; she died of cancer in 1956. But not before leaving a legacy of accomplishment, and not before establishing herself as one of the greatest and most-important golfers of all-time. Read more about Babe Zaharias. 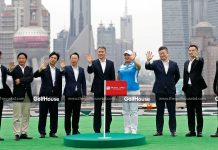 EVERY GOLFING ENTHUSIAST MUST KNOW GOLF ETIQUETTE AND MANNERS