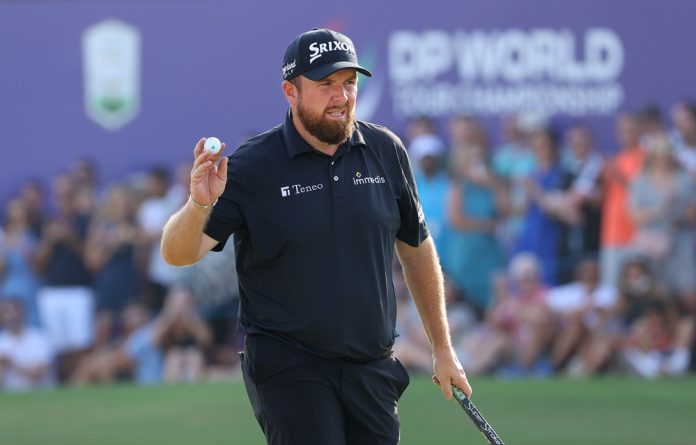 McIlroy followed his opening round 65 with some more impressive play as he carded three birdies on the front nine, before dropping a shot on the tenth hole. Further birdies on the 11th and 16th gave him a one shot advantage playing the last but his tee shot found the bunker and his third shot trickled back into the water protecting the 18th green.

After taking a penalty drop in the fringe, the four-time Major Champion then left his chip short and two putted for a double bogey seven, signing for round of 70 to go from one ahead to one behind on nine under par.

McIlroy’s Ryder Cup partner Lowry had earlier set the clubhouse target in the final Rolex Series event of 2021 after firing five birdies and an eagle on the 14th to move to ten under. He was then joined on that mark by Englishman Horsfield, who carded five consecutive birdies from the sixth in a 66, and American Catlin who went one better, surging up the leaderboard with a 65 after five birdies in six holes after the turn.

Lowry finished joint second behind Jon Rahm in the 2017 DP World Tour Championship and he is seeking his first European Tour win since lifting the Claret Jug at Royal Portrush in 2019.

Sweden’s Alexander Björk shares fourth position with McIlroy after a 67, while Collin Morikawa further strengthened his bid to win the Race to Dubai with second successive 68 to share sixth place with former World Number One Martin Kaymer (68), two shots back on eight under par.

Only five other players can potentially deny the Race to Dubai leader the chance to become the first American player to be crowned European Tour Number One, and of those Paul Casey and Matt Fitzpatrick are best placed in the tournament, with both Englishman carding rounds of 69 to sit give shots back on five under par.

Morikawa’s fellow American Billy Horschel, the only player aside from the Open Champion who can win the Race to Dubai without winning the tournament, signed for a round of 70 and is ten shots off the pace in tied 43rd.

Shane Lowry: “I think it was pretty similar. Obviously four shots better today than yesterday, but bogeyed the last yesterday. And suppose when I chipped in on 14 was a huge boost today and holed a couple more putts. Felt like a fairly straightforward, 10-under first two rounds.

“I feel like my game is in good shape and I feel like I know my way around this place and I know how to play here. I’m happy to be atop of the leaderboard, late tee time tomorrow and I’m looking forward to the weekend.

“Just keep doing what I’m doing. For me personally, it’s two more days left and then end of a long year and a half, I suppose, long couple years. I’m looking forward to giving everything and leaving it on the course this weekend and hopefully I’m there near the top of the leaderboard come Sunday afternoon.”

Sam Horsfield: “It was nice. I feel like I’ve been playing pretty well and I just haven’t been scoring great. You know, today I think I made five in a row, and it was really nice to see some putts drop there. I had a little wobble, 16 and 17, but it was really, really nice to birdie 18.

“I’ve definitely given myself a lot of opportunities the last two days and I just want to continue to do the same thing. I didn’t putt overly great today. Missed a few on the back nine there, but definitely get the momentum rolling.”

John Catlin: “Very pleased to get off to a good start here. This is a very challenging golf course. Every single shot has to be executed almost to perfection. And you know, it was nice to hit a lot of really, really good shots.

Rory McIlroy: “I’m playing nicely. I started well again today and hit a lot of good shots on the front nine. It was sort of a little scrappy around the middle but was able to hang in there with my short game.

“Hit a nice one on 16, so the good stuff is in there. It’s just a matter of, yeah, I mean, I still feel like I played well and I feel like 70 is sort of the worst I could have shot today, especially with the finish and hopefully that’s the bad one out of the way.

Collin Morikawa: “Definitely different. I didn’t hit my irons as well. Wasn’t hitting as quality of golf shots but made sure I was able to make some birdies and kind of minimise the bogeys. Took advantage of the par fives for sure.

“I’m aware. But I’ve got to focus on the weekend. I want to win this tournament. That’s all I care about, winning this tournament everything, and else will kind of settle itself. That’s my focus. We’ve played a decent two days and we’ve got two more rounds to go.”