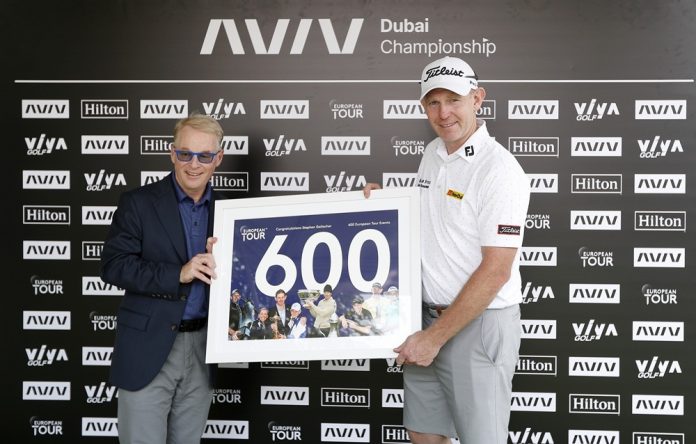 The four-time European winner from Scotland has enjoyed a celebrated career which included his appearance as the only home player on Paul McGinley’s winning European side at the 2014 Ryder Cup in Gleneagles.

The Bathgate player – nephew of another European Tour legend Bernard Gallacher – made his professional debut on the European Tour in 1996, having earned his card at Qualifying School in 1995 soon after a stellar amateur career culminated in forming part of the victorious Great Britain and Ireland Walker Cup team at Royal Porthcawl.

His maiden European Tour title was a dream victory, as he triumphed on home soil and at the Home of Golf by lifting the 2004 Alfred Dunhill Links Championship trophy at St Andrews Old Course, overcoming Graeme McDowell in a play-off.

He had to wait another nine years before his next win, but it was another memorable one as he triumphed in the 2013 Dubai Desert Classic by a three-shot margin before successfully defending that very title a year later.

That win helped secure Gallacher’s Ryder Cup debut, as he was selected by Captain McGinley for a European side which went on to record a memorable 16½ – 11½ win over Tom Watson’s USA team at Gleneagles.

Five years later, Gallacher would seal a fourth European Tour title at the Hero Indian Open, overcoming Japan’s Masahiro Kawamura in New Delhi for a win made even more special by the fact that his son Jack was carrying his bag.

Gallacher represented Scotland three times in the World Cup, in 2005, 2011 and 2013, and represented Great Britain and Ireland in the 2013 Seve Trophy, while he also represented Europe on two occasions in addition to the 2014 Ryder Cup – in the 2013 Royal Trophy and the 2014 EurAsia Cup.

“Obviously I’m very proud to reach this number,” said Gallacher. “It’s one of those ones that creeps up on you. When I reached 500, that was pretty good to do and there have been a lot of guys that have done it, but 600 is a bit more special. Here’s to 700 now!

“Dubai is the place that put me on the map, helped me get in the Ryder Cup with my second win here in 2014. I just love it here and I love coming over. There’s something in the air that brings the best out in me, so I’m delighted to do it here.

“I think it’s important to give back to the game, especially coming from the Home of Golf, and we’re such a small country. It’s great to see that golf is blooming in Scotland now.

“I’ve been doing my Foundation for almost ten years and we don’t do it just to see people come on tour – it’s more about participation levels – but it’s nice to see players who have played in your own events and then come through to the European Tour. It’s in great health now, golf in Scotland, and it’s great to see.”

Keith Pelley, Chief Executive Officer of the European Tour, said: “I would like to extend my sincerest congratulations to Stephen on reaching this incredible milestone, becoming just the 14th player in the history of our Tour to reach 600 appearances.

“Stephen’s record since making his European Tour debut as an amateur at the 1993 Scottish Open is truly remarkable. To win a maiden title on home soil and represent the winning European team at Scotland’s Ryder Cup in 2014 are memorable achievements and Stephen will rightly go down as one of the great Scottish players of the modern era.

“Added to that, he is a valued member of our Tournament Committee and an extremely popular character among players, fans, media and our own European Tour staff. In addition, his fantastic work with the Stephen Gallacher Foundation will perhaps be his greatest legacy as he continues to give back to the game through his tireless work at the grassroots level.”

The 13 other players to have reached 600 events are: