Tamsui, Chinese Taipei, September 28: Settee Prakongvech produced a flawless seven-under-par 65 to lead by two shots from Gavin Green in the opening round of the Mercuries Taiwan Masters on Thursday.

The 23-year-old Thai surprised even himself when he returned with five birdies and one eagle to take charge of US$800,000 Asian Tour event played at the challenging Taiwan Golf and Country Club.

Malaysia’s Green, ranked third on the Order of Merit thanks to three runner-up results this year, posted six birdies against one bogey to keep up his chase for a first Asian Tour win.

Settee was in the first group to tee off in the morning and he took advantage of the calm conditions and a hot putter to shoot his lowest round on the Asian Tour.

Playing in only his second appearance at the Mercuries Taiwan Masters, Settee made 24 putts which included five one putts in his closing holes.

The big-hitting Green looks to build on his runner-up finish in Korea a fortnight ago where he narrowly missed out on an Asian Tour victory by one shot.

I didn’t expect to shoot a 65. I thought if I played really well, a 68 would be a good score or if I played decent, maybe a 70. But to shoot a 65 is a big surprise to me! This is my lowest score on the Asian Tour.

The first time I played here was in 2014 so I know how difficult this course is. Now I’ve improved as a player. I have more experience this year and I plan my game better. I’m also playing much better.

I played really safe and have more confidence with the driver. My shot is getting better as well so I hope to continue this form because my season hasn’t been very good so far.

Eagle on hole 7: Driver to fairway, 5-iron to the green and holed a 35-feet eagle putt.

It was hot out there. There were a couple of holes that were so tough and you had to play on different fairways. That’s what I did but I made some putts that saved me. My putting was solid.

It is so hot out there so I don’t think it is normal. At the same time everybody is playing in the same weather so you just need to deal with it. I had a lot of good holes. When I was in trouble, I still managed to make up-and-down so that was very important.

I played very well from tee to green. I stayed out of trouble from my tee shots and gave myself a lot of birdie looks. It wasn’t windy in the morning so I took advantage of that. I three putted on two holes so that was disappointing. Overall it is still a good start.

My game has been okay. In the last five weeks I played on the European Tour and I got a lot of experience from there. Yeah the weather here is much hotter than Europe but I still prefer it than being cold!

I want to focus on my plan this week. I don’t want to think about the result or trophy. If I can keep the ball on the fairway, I will have a chance to score.

The most important thing to do here is to hit the fairways but I only managed to find seven fairways. The rough is shorter here this year and the green speed seems to suit my game. This is my best score on this course because I’ve missed the cut here in my last five appearances. The goal for me now is to make the cut for the weekend. I will try and play it safe tomorrow.

Scores after round 1 of the Mercuries Taiwan Masters 2017 being played at the par 72, 6923 Yards Tamsui Course course (am – denotes amateur): 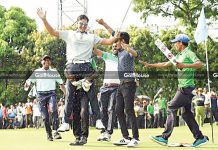 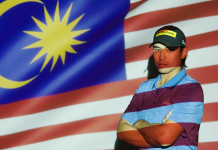 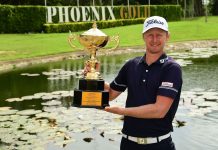 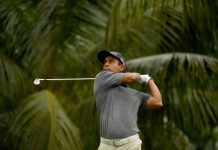 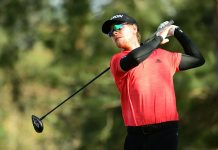 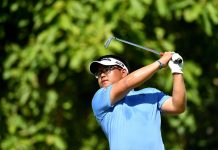