For so long Sergio Garcia was the nearly-man who many had written off to win a major title, but no longer after the Spaniard finally made his breakthrough with a dramatic Masters victory at Augusta on April 9, 2017.

The Spaniard beat England’s Justin Rose on the first hole of a sudden-death playoff after the European Ryder Cup team-mates had fought an intense duel on an electrifying Sunday afternoon.
Garcia won his first major at his 74th attempt and became the third Spaniard to win the Masters after two-time champions Seve Ballesteros (1980, 1983) and Jose Maria Olazabal (1994, 1999).
The pair traded shots — and congratulations — in a head-to-head battle to rival the best Augusta has seen and emulate the remarkable shootout between Henrik Stenson and Phil Mickelson in the British Open at Royal Troon in 2016.
The 37-year-old Garcia, who missed a six-foot putt to win on the final green in regulation, clinched victory with a birdie on the 18th green on the first playoff hole after Rose had driven into trees and made a bogey five.
As the ball toppled into the cup, Garcia sunk on his haunches and pumped both fists before embracing Rose with tears in his eyes. 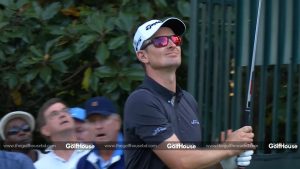 “It’s been such a long time coming,” Garcia, who is getting married later this year, said during the presentation ceremony in the Butler Cabin. “I’m so happy.”
On donning the famous green jacket on the anniversary of Ballesteros’ birthday, Garcia added: “To join him and Jose Maria, my two idols in golf my whole life is something amazing.
“Jose sent me a text Monday night telling me how much he believed in me.”
Rose, 36, the Olympic champion and winner of the 2013 US Open, was bidding to become the second consecutive Englishman to win after Danny Willett’s triumph last year and the first European to win a US Open and a Masters in his career.
“I’m disappointed. I’m really happy for Sergio, obviously I’d love to be wearing the green jacket but if it wasn’t me I’m glad it’s him,” Rose told the BBC.
The pair finished nine under after 72 holes, three shots clear off South African Charl Schwartzel, the 2011 champion.
American Matt Kuchar, who made a hole-in-one on the short 16th, and Belgian debutant Thomas Pieters ended on five under.
Source: AFP