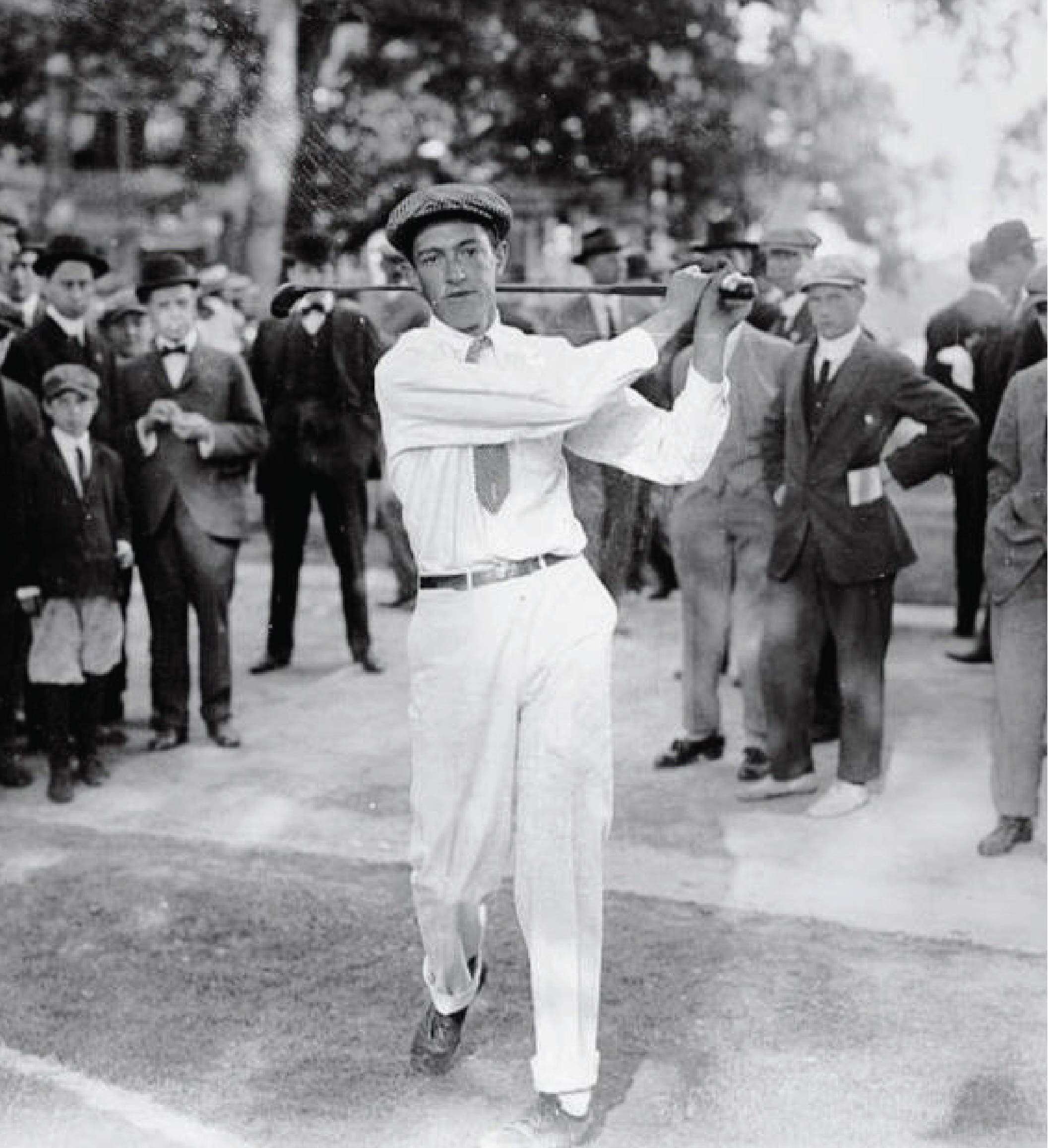 1 July 4, 1826, in fact, which is easily the wildest thing in U.S. history. Although the true historians among you know that July 2, 1776, is when the “declaration of independency” (as Jefferson and Adams called it) was signed by delegates in Philadelphia.

3. The origins of organized golf in the U.S. are generally ascribed to the founding of Saint And rew’s Golf Club in Yonkers, N.Y. in 1888. The game was played prior to that in other places in the U.S., but the “Apple Tree Gang” in Yonkers gets the nod for having something resembling a club (as opposed to just a golf course). Emigrant Scots John Reid and Robert Lockhart, in particular, are oft cited as the “fathers of American
golf.” Saint Andrew’s was a founding member club of the USGA in December 1894 along with The Country Club, Shinnecock Hills, Chicago Golf Club and Newport Country Club.

4. Lowery went on to make millions as a Lincoln Mercury dealer in San Francisco (where he employed a young Ken Venturi). He also eventually became a member at Cypress Point, California Club, Thunderbird, Seminole, San Francisco GC and Augusta National.
5. Forget superb in Philadelphia, a hotbed of golf, there were 800 golfers of any kind with handicaps in 1912. Among them was A.W. Tillinghast with a sporty 6.
6 . He joined the club in 1910 while still in high school because he knew club affiliation was necessary to play in the U.S. Amateur. He borrowed the $25 membership fee from his mother and took a summer job working in a dry-goods store to repay her.
7 .The house at 246 Clyde Street is still a private home and is indeed on the same street as The Country Club.
8 Late in the day, Chick Evans, out of Chicago, came home in 31 to pip Ouimet. Today, the two biggest caddie scholarship funds in the U.S. are named after Evans and Ouimet.
9 The U.S. Amateur was at The Country Club in 1910, the first time he tried to qualify (and why he borrowed $25 from his mother to join Woodland). He also tried and failed to qualify for match play at the 1911 (Apawamis Club, Rye, N.Y.) and 1912 (Chicago Golf Club) U.S. Amateurs. In each of his first three tries, he missed qualifying by one stroke.
10. The world’s first golf writer of note (and still one of a handful of truly great ones), grandson of Charles Darwin, a leading expert on Charles Dickens’ work and captain of the R&A in 1934.
11. Among the spectators during the week was William Howard “Big Bill” Taft, whose presidential administration ended in March 1913. He was the first president to be an enthusiastic golfer and the first to turn up at a major golf event.
12. The first four rounds were played on Thursday and Friday 36 holes each day.
13. The referee for the match was USGA Secretary John Reid Jr., son of the cofounder of Saint Andrew’s in Yonkers.
14. The crowd was obviously pulling for Ouimet and was occasionally overzealous. But, to be fair, fans at tournaments in Britain back then sometimes behaved boorishly too. Golf fandom was still in its infancy.
15. J.H. Taylor and James Braid rounded out the Triumvirate. Taylor also played in the 1900 U.S.
Open, finishing second to Vardon, and was in the 1913 field. He finished T-30 at Brookline in his second and final appearance in the U.S. Open. Braid never played in the U.S. Open.
16. The trophy presented to the winner of the British Open starting in 1872.
17. Ray made other headlines that week in 1913. On Thursday night, at the Copley Square Hotel, he gave fellow English pro Wilfred Reid two good shots to the schnoz. “A couple of well directed right-handed smashes on the nose, delivered with the full force of 220 pounds of bone and muscle…” is how the Globe described it.
18. Ouimet’s mom said “she couldn’t resist the temptation” to walk across the street to the 17th hole on Friday and see how her son was getting along. Swept up in the energy, she stayed with the crowd for the 18th hole too. Only after Francis holed out and was carried away by the crowd did she realize she was wearing her house dress.
19. Both played in one more U.S. Open. In 1920, Ray won at the Inverness Club in Toledo. Vardon finished second. 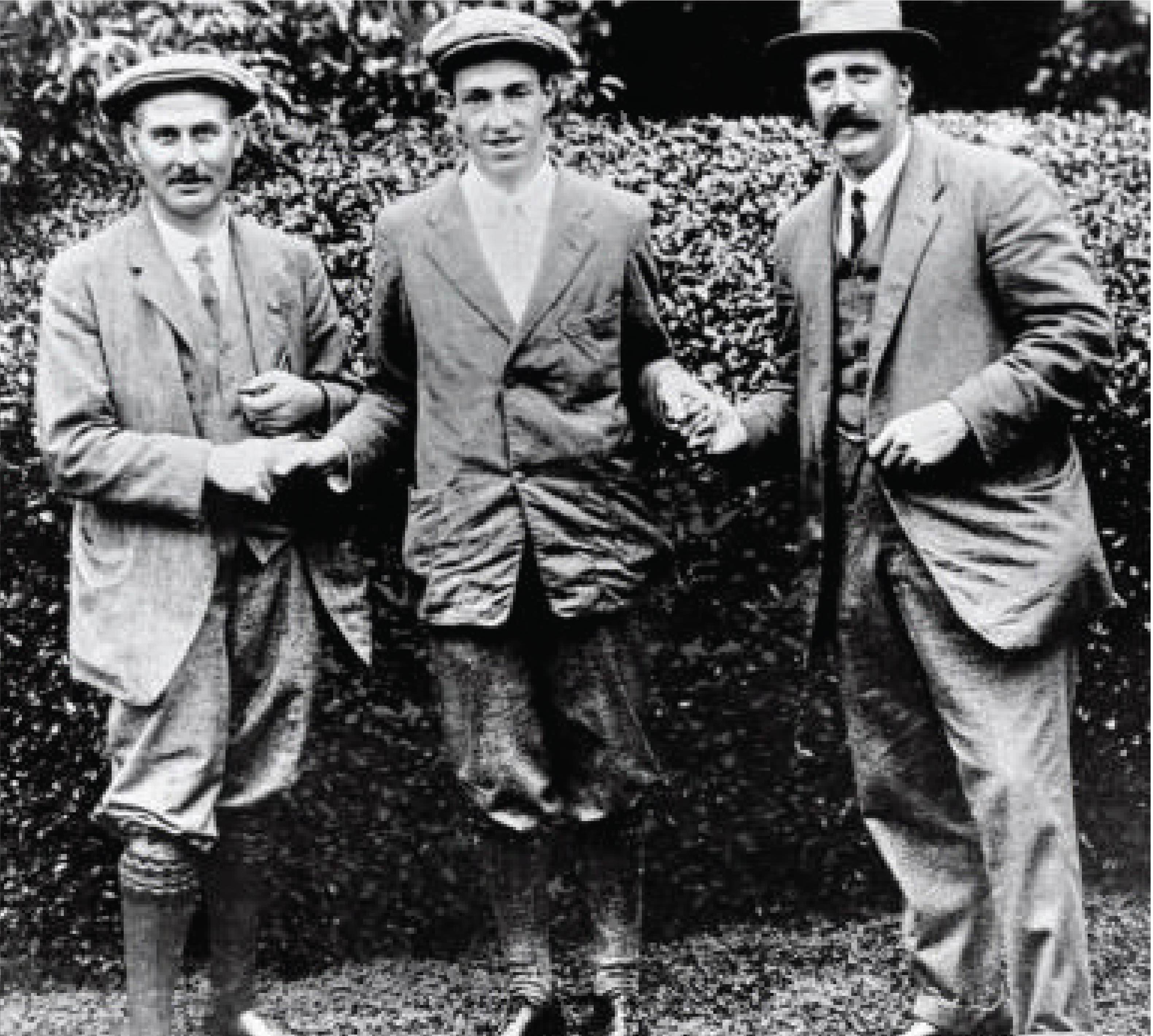 Opposite page:
Ouimet was the
1909 Boston
schoolboy champ.
Far left: Overcoated
onlookers
pose with the lucky
winner (back) and
his wee looper
(front) after a
rain-soaked playoff
Saturday. Near
left: Vardon (left)
and Ray were
savvy vets and
heavy favorites.