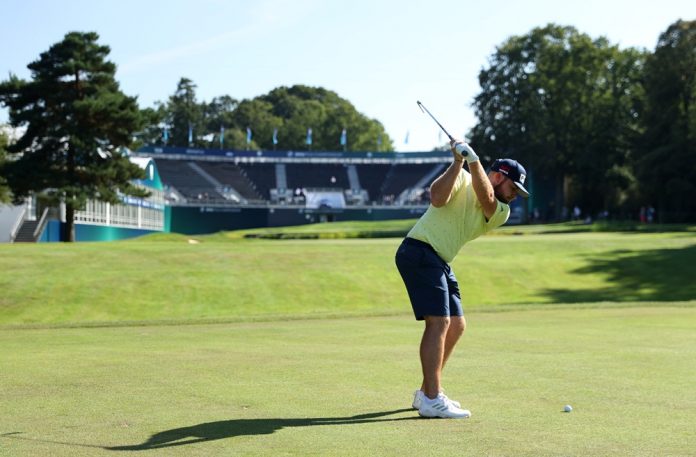 Tyrrell Hatton will tee it up alongside European Ryder Cup Captain Pádraig Harrington as the Englishman defends his BMW PGA Championship at the third Rolex Series event of the 2021 Race to Dubai.

The 30-year-old will no doubt receive a hero’s welcome this week at the prestigious Wentworth Club, where fans will return in their droves after last year’s event was played behind closed doors due to the Covid-19 pandemic.

He will be one of a popular trio teeing it up on Thursday afternoon, joined by three-time Major winning Irishman Harrington and Norwegian Viktor Hovland, who will make his Ryder Cup debut at Whistling Straits.

Another player hoping to be in Wisconsin in two weeks’ time, on the opposing side, is American Billy Horschel as the former FedEx Cup Champion plays the BMW PGA Championship for a second time.

Tyrrell Hatton: “It kind of feels surreal being back and being defending champion here. Firstly, it’s amazing to see the stands back and all the players this week, obviously looking forward to welcoming fans back and I’m sure they will create a great atmosphere for us to play in this week. The course is in great shape and yeah, it’s just nice to be back here.

“I guess I’ve been lucky to play well during these big events. I certainly don’t try and change my routine or anything like that. They have fallen on good weeks for me and obviously I’m very thankful for that.

“It’s obviously good memories coming back here. To be honest I only live sort of 25, 35 minutes away anyway. Been lucky enough to play here numerous times when I’ve been back here in the UK to the point where it almost feels a bit like a second home course.

“I feel pretty comfortable out there, and hopefully I can have a good week this week. I know my form’s not been that great for the last sort of three or four months maybe. But hopefully I can find something this week that if I make the Ryder Cup team, certainly hopefully I can help the team out.”

Pádraig Harrington: “It’s an interesting week. There’s obviously a number of players who are 100 per cent qualified (for the European Ryder Cup team) at this stage, Jon Rahm, Rory McIlroy, Paul Casey, Tommy Fleetwood and Viktor Hovland, so they are all in 100 per cent, with a few more players that are virtually there.

“But there are a number of players who can push their way into the team and a lot of points to play for this week. We wanted a bit of drama at the end and a bit of excitement, so yeah, it’s going to be an interesting week.”

Billy Horschel: “As I said (last time I played here) two years ago, I grew up watching this event on TV. It was the first week we were out of school and European Tour comes on early, so I was up early watching it and absolutely loved what I saw on TV from the course to the crowds and just the history of the event.

“I’ve always wanted to get over here and I was planning on getting over earlier than 2019, but it just didn’t happen and when I came here in 2019, it was everything it lived up to be and more. It was just a blast. I’m looking forward to another great week.

“Knowing no American was won the Race to Dubai, it would be cool to do that. Also being a FedEx Cup Champion, I would love to be able to do that. I have to play well here this week and play well in two weeks, three weeks when I play Dunhill and at the end of the year at the DP World.”