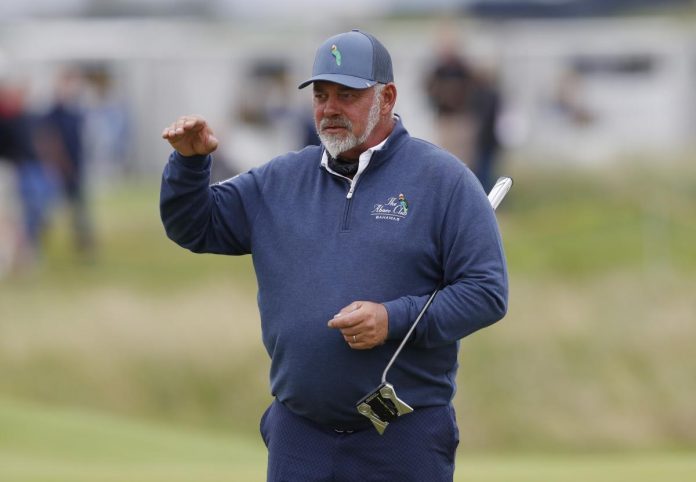 Round Two Report
Darren Clarke posted four birdies in his final six holes to take a one-stroke lead into the third round of The Senior Open Presented by Rolex at Sunningdale Golf Club.

The Northern Irishman added a three under par round of 67 to his opening 65 to reach eight under par, one stroke clear of defending champion Bernhard Langer and American Jerry Kelly on seven under par.

The 2011 Champion Golfer of the Year started well with birdies at the first and the third, but three bogeys in a row from the sixth threatened to derail his round. However, he bounced back with five birdies and only a single dropped shot in his final ten holes to ensure he would be the man to catch after 36 holes.

Clarke’s playing partner Ernie Els shares fourth place with two-time Senior Major Champion Paul Broadhurst on six under par, with the Englishman’s five under 65 the joint-low round of the day.

The cut fell at five over par, with 79 players surviving to compete over the weekend in Berkshire.

Darren Clarke: “I got a couple of birdies on the first three holes and made some poor swings, and last few, hanging in there and make something good swings, and just made good swings all the way coming in and kept giving myself opportunities. Pleased that I finished on 8-under because the wind was swirling about a little bit.

“It would be huge to win. But you know, we’re all long enough in the tooth to know this is only two rounds and a lot of golf to be played yet. I would love to have this trophy sitting beside the Claret Jug. Got to go work on some iron play, my iron play wasn’t there especially around the front nine today but other than that drove the ball well. Really in the mix come Sunday afternoon and would love to improve.”

Bernhard Langer: “It was solid yesterday. Today, I hit a couple of loose shots. Just really made one long putt somewhere, 13, I think it was, otherwise I really haven’t made a whole lot of putts. I’m struggling with my putter. I had three 3-putts in two rounds which is too much on these greens.

“But overall, it’s fairly solid and I’m driving the ball fairly good, which keeps me in play to attack some holes. That was key yesterday. I got off to a great start today with an eagle on 1 and another birdie but just couldn’t continue on the back side.

“Keep the stuff dry as much as possible. I have a good caddie to help me with that. Just plug along. It’s going to be miserable at times when it’s rainy and windy and all that but hey we’ve been there before. Just try and make the best of it. Keep the ball in play and hopefully make some birdies and give them something to cheer for.”

Ernie Els: “It was a little bit more difficult today, a little tricky. The wind, you didn’t really know where it was coming from. A bit of swirl going on. But really dug in there a little bit at the end to try and salvage 67. I did hit some really good shots today. I feel like what I’m working on is kind of coming through a little bit. But Darren is a great frontrunner, played really well today, so got a lot of work to do.

Jerry Kelly: “I felt better at the range session yesterday. I definitely hit the ball tee-to-green much better today. There really weren’t many new shots out there, a couple of them, but the putter was suspect and I kept on trying to do something, do something, and then finally the last four holes, I kept my head down, which you know I’m not known for.

Paul Broadhurst: “Just played solidly. Didn’t make too many mistakes. The tough holes into the wind, 10, 12, a few others but the tough holes I played really well. I birdied 10, which many people are doing, it’s playing long, but kept it in play and didn’t hit too many bad shots. When I had a chance, I took it like on 18.

“A shot at a time, the old cliché, no magic scenario or anything like that. I know the weather is not supposed to be too good but hopefully we’ll miss the rain showers and thunder and lightning, and the course will be softer again. It started to firm up this afternoon and some of the holes are playing shorter, but if the course softens overnight, it will be different tomorrow.”