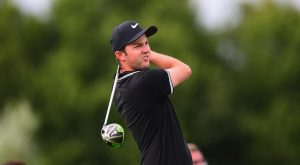 Ashley Chesters posted a flawless 67 to grab the clubhouse lead before the second round of the weather-affected Porsche European Open was suspended due to fading light.Chesters and fellow Englishman Jordan Smith were tied at the top of the leaderboard on eight under par when the second heavy downpour of the day forced play to be halted due to a waterlogged course at 12.59pm local time.Upon resumption of play after close to a four hour delay, the 27 year old maintained his composure to finish his round with a par at the long ninth for a second successive bogey-free round to set the clubhouse target at nine under par.That left him one stroke clear of Siddikur Rahman, who completed his round on Friday, and Richard McEvoy and defending champion Alexander Levy – both of whom were still out on course when play was suspended for the day at 20.52pm.Smith meanwhile sits a further shot back at seven under alongside Sweden’s Jens Fahrbring after a run of five birdies on the back nine pushed him up the leaderboard, while a further eight players are tied at six under including overnight leader Julian Suri. Players will complete round two when play resumes at 8am on Saturday morning with round three not commencing before 11am.

“I definitely didn’t hit it as well off the tee today but the putting made up for a lot so that was nice. I’ll do a bit of work on the range later and hopefully sort the driving out and get away tomorrow.

“I didn’t even realise I had gone bogey free today, it didn’t really come into my head on the way around so, it’s always nice to keep the bogeys off the card, it’s the easiest way to get a good score.

“I am so happy, especially today because my short game was very good. I holed many long putts today and that’s why I played so good and managed to make a better score.

“I’m very fortunate that my short games has been very good and because of that I managed to score otherwise it is a very long course for me. I am playing quite good, I’m doing everything I’m supposed to do and I think everything is coming smoothly.

“I am excited for the weekend and really looking forward to the weather being good.”

“I’m loving the course out there and playing good, so I’ve just got to go into the weekend and give it my best.

“I was in a good flow, I would have loved to have get the two holes done and dusted there but obviously you can’t really help the weather, so you just have to come in and relax, take your mind off things and get started again.

“I had a good year last year and the target this year was to keep my tour card, which I managed to do pretty quickly, so now the next aim is to win an event.”