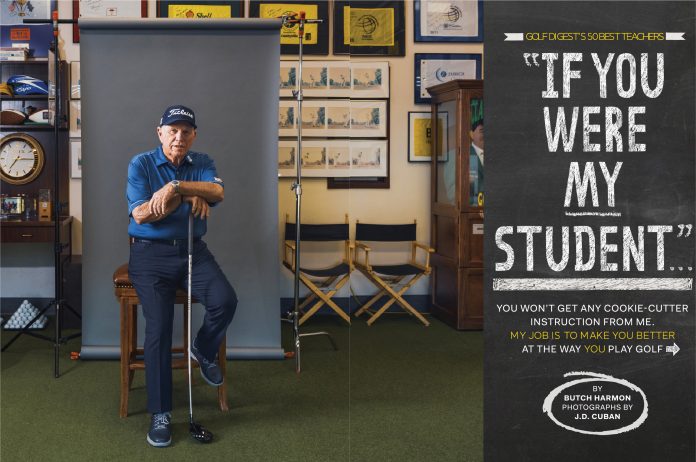 “BEFORE WE START, KNOW THIS ABOUT ME: I DON’T TEACH GOLF TO PEOPLE, I TEACH PEOPLE TO PLAY GOLF. I DON’T HAVE SOME LIST OF SWING POSITIONS THAT EVERY GOLFER NEEDS TO COPY. I CAN’T TEACH YOU TO SWING LIKE TIGER WOODS. MY GOAL IS TO TAKE WHAT YOU’RE DOING AND MAKE IT WORK BETTER. YOU HAVE YOUR OWN WAY OF THINKING, YOUR OWN PHYSICAL LIMITATIONS. CHANGING THOSE ISN’T GOING TO HAPPEN IN A GOLF LESSON. WE NEED TO FIX THE ONE THING THAT’S CAUSING THE BIGGEST PROBLEM IN YOUR SWING. I CALL IT THE CANCER. WHEN WE FIND IT AND WE WILL—YOU WILL GET BETTER. WITH PETER MORRICE”

When you come to my lesson tee, the first thing I’ll do is distract you from the anticipation you’re feeling.
You’ll warm up with some wedge shots, and I’ll ask you about your game, but more about your sports teams, where you live, what else you like to do. It’s chitchat but with a purpose. You’ll be hitting balls with out thinking about your swing. That’s what I need to see.

When I go to major champion ships with my players, other
teachers see us laughing andjoking around. They’ll say to me, “Whatthe heck were you guys doing?” They expect us to be grinding over technique.Itellthem, “I’m trying to keep them loose.Ifthey need swing changes here,I haven’t done my job.” The pointis,I want my players to be themselves, whether it’s in a firstlesson or on the range before the final round of a major. Faking it doesn’t work.

After you hit some 8-irons, we’ll
go into my teaching bay, and I’ll
video your swing.
I’ll explain what I’m seeing, and then we’ll look at the video. I won’t play the video and ex-plain as we go—no way. That would give you the chance to see other things you don’t like, such as bad posture or a short backswing. This is not a democracy. I need you to follow my lead and see only what I’m seeing.
I’ll describe what’s going on and how it’s producing the shots you’re hitting.

Then you’ll make some slow-motion practice swings, and I’ll physically move you into position.
Once you can do it on your own, we’ll video those slow-motion swings. We won’t look at launch-monitor num-bers. You won’t put on any awkward training devices or use any swing aids.
It’s just slow motion, feeling the move-ment.
When you see on video the dif-ference between those practice swings and your first swings, you only have to be open-minded that you can do it at regular speed.

I’ll take you out of your comfort
zone, for sure. One time I was work-ing with Seve Ballesteros, and he was caught up in mechanical swing thoughts. After a few frustrating ses-sions, I knew we needed a fresh start. I walked out 50 feet in front of him and held up my hand: “Hit a draw starting the ball here.” Seve replied, in his Spanish accent, “Bootch, I kill you.” But I got him to do it, and he hit a perfect draw. Then I raised my other hand: “Hit a fade from here.” Perfect fade. We went high, low, and every other shot I could think of. We got Seve back to creating shots and not think-ing about mechanics.

After we see your changes in slow
motion, I’ll probably give you one
practice drill that trains the move
we’re trying to make. You’ll use that drill for a while, alternating with normal swings, and you’ll start to get comfortable with the adjusted motion. I will never say, “Let’s try something here” or “Does that feel better to you?” If I have one secret as a teacher, it’s that I will convince you that I got it right. If I hesitate, how could I expect you to believe me? I know I wouldn’t. 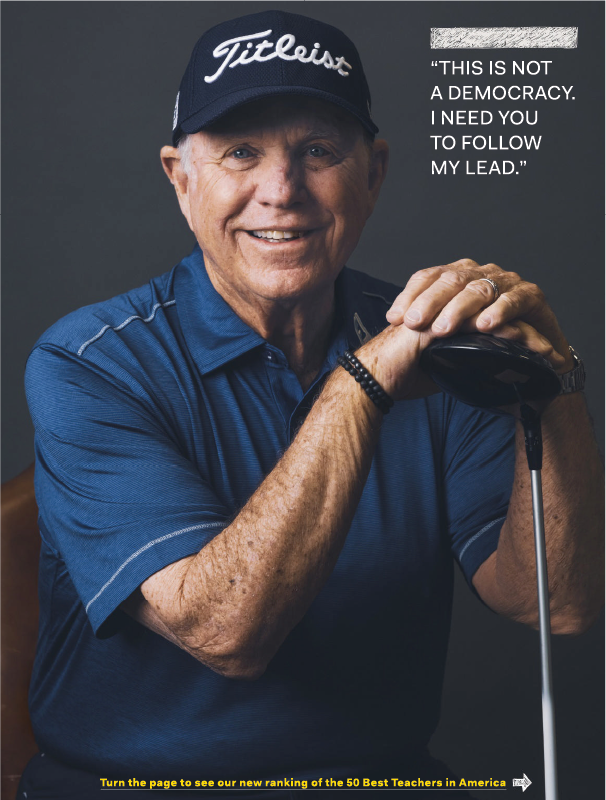 Finally, we’ll go back to normal
8-iron swings, incorporating the
changes. This might require a leap of faith because you’ll have to fully commit to using what we just worked
on. If you waver, we’ll go back to slow-motion swings until you can go full speed. When you do, we’ll look on split-screen video at the swing you’re
making versus the one you walked in with. Sometimes they hardly resemble each other; sometimes the physical change is small, but the results are big. Every lesson is different; every student needs something different.

Take Tiger Woods. One day I was
on the range with him, and he was
trying to hit fades with his long
irons. He wasn’t seeing what he want-ed, and he was getting hot. There was an opening in the fence down the right side, so I said, “I’ll give you 100 bucks if you hit it through that opening.
Five tries.” He did it on the first swing. Tiger is always motivated by a chal-lenge. Tell him he can’t do something, and he’ll prove your wrong. I’ll take the same approach with you. I’ll figure out how to motivate you, and you’ll be amazed at what you can do.

At the end of the lesson, I’ll print
before and after images that isolate the chan ges we’ve made. I might draw some lines to highlight the differences, but you won’t get a video to take home—I don’t want you to self-diagnose. I’ll write three or four reminders on the outside of the enve-lope with your pictures in it. I know you’ll end up reading those keys every time you grab that envelope. A consis-tent, straightforward message is critical. You’ll have a clear direction, and if you take it, you will improve. That’s how our lesson will go.