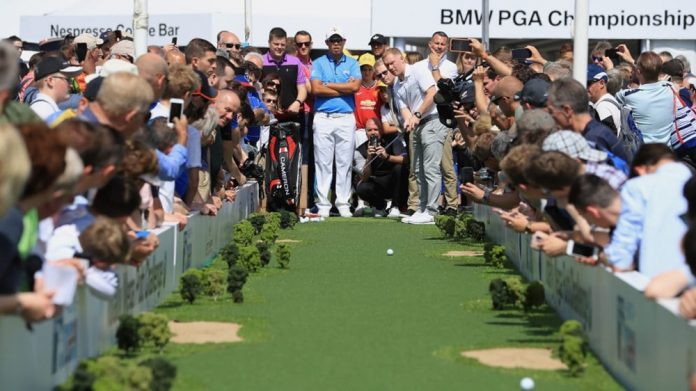 The UK’s leading dementia charity was announced as the Official Charity to the prestigious tournament in 2019 and will return in 2021 as beneficiaries of the charitable funds raised through a variety of onsite activations, bolstered by the return of fans to the Surrey venue.

Tyrrell Hatton will defend the title he claimed last October, earning his third Rolex Series victory and moving into the world’s top ten for the first time in his career in the process.

He will be joined by a host of English and international stars in the final counting event for qualification to Pádraig Harrington’s European Ryder Cup team, as they attempt to retain the famous trophy against the United States two weeks later at Whistling Straits in Wisconsin.

September marks World Alzheimer’s Month, with World Alzheimer’s Day on the 21 September. Fans at the BMW PGA Championship will have the opportunity to help raise funds for Alzheimer’s Society and its vital work when it has never been more needed, with people with dementia among those worst hit by coronavirus.

The partnership will build on the charity’s work with the sports industry. Alzheimer’s Society’s Sport United Against Dementia campaign will bring the sporting world together to fund research, help people remain connected to their local communities through the clubs they know and love, build awareness of dementia, break down stigmas and fund vital support services to ensure the sporting community can get the dementia support they deserve.

There will be activations across site during the BMW PGA Championship, including the fan-favourite Mega-Putt Challenge and an exciting new nearest-the-pin competition, both located in the Spectator Village.

Celebrities taking part in the BMW PGA Championship Celebrity Pro-Am on Wednesday September 8 will also have the chance to donate at the ‘Hit the Green’ Competition to take place at the par three tenth hole.

BMW will also play their part, and a donation of £78,370 – the equivalent value of a BMW iX xDrive40 Sport – will be made to Alzheimer’s Society by the tournament title sponsors for the first hole-in-one of the week at the 14th hole.

Meanwhile, the European Tour will raise funds for Alzheimer’s Society by providing a boost to the European Tour’s Every Birdie Counts initiative, donating an additional €10 for every birdie made through the duration of the tournament, and €100 for every eagle.

“Their work across the UK is truly magnificent in providing support for those affected by one of the UK’s biggest killers, as well as funding research and campaigning to improve the lives of hundreds of thousands of people living with dementia.”

Alex Hyde-Smith, Director of Fundraising at Alzheimer’s Society: “We’re hugely grateful for the support of the BMW PGA Championship, particularly as we know the last two years have left a devastating mark on many of the 850,000 people with dementia in the UK and their loved ones. Our support services have been used more than 5.5 million times since March 2020, but with the support of the PGA, we can be a vital lifeline to even more people who don’t know where to turn.

“This partnership builds on our work to unite the sporting world so we can really make the biggest difference, providing hope for future generations through research and transforming the way the industry supports people affected by dementia, so no player, former player or fan must face dementia alone.”
Chris Brownridge, Chief Executive Officer, BMW Group UK: “We have been supporting Alzheimer’s Society as corporate partners since 2019 and are delighted that everyone able to attend this year’s BMW PGA Championship at Wentworth will have the opportunity to make a contribution towards the fantastic work they do, whilst enjoying a great day of golf.”